Turtles are all eating plastic

Turtles are all eating plastic

Scientists found plastic in the gut of every single sea turtle they examined, according to a new study.

It’s especially alarming given that just a few pieces of plastic can be lethal for sea turtles.

Despite the risks, 18 billion pounds of plastic waste ends up in our oceans every year. Polystyrene foam—what most of us call Styrofoam—is one of the worst forms of plastic pollution. It never fully degrades, but continues breaking down into smaller plastic particles, called microplastics. And it lasts in the environment somewhere between centuries and forever.

To protect sea turtles and other ocean wildlife, the solution is clear: reduce, reduce, reduce our plastic. For a bird, fish or turtle, these small pieces of plastic are easily mistaken for food. When ingested, this waste can block animals’ digestive systems, leading to death by starvation.

And the stories are piling up. This March, a Cuvier’s beaked whale was found dying off the coast of the Philippines with 88 pounds of waste in its stomach, including plastic garbage and grocery bags. And this whale isn’t alone.

We know the plastic waste in our oceans, rivers and lakes injures or kills wildlife. Too many marine animals die each year from plastic waste, including starving to death from indigestible microplastic in their systems.

To protect turtles, whales and other ocean creatures, we’re working to curb plastic pollution—starting with calling for bans on plastic polystyrene foam and straws. With your support, we can continue to choose our planet over plastic. 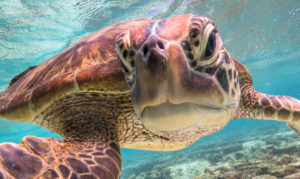