To save elephants, we’re sending legislators thousands of origami ones

To save elephants, we’re sending legislators thousands of origami ones

Sometimes, cutting through the political noise to make our voices heard for the planet means thinking outside the box.

In March, the Trump administration reversed the ban on elephant hunt “trophies.” Now, we’re working to convince Congress to pass the ProTECT act. This bill would ban the taking for trophy and importation of African elephants, and any other endangered or threatened species of wildlife, once and for all. 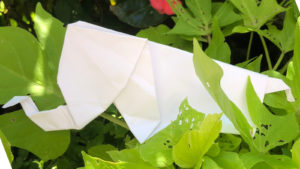 In October 2018, more than 7,000 Environmental Action supporters pledged to ask their legislators to pass a bill that will protect vulnerable elephants—by sending an origami one.

We want to show our legislators that we care about this issue and get them to take notice. So we’re asking everyone who can to mail their legislators an origami elephant and a letter asking them to support this critical legislation.