Southern resident orcas have reached a dangerous 34-year low. Together, we’re working to save them.

Southern resident orcas have reached a dangerous 34-year low. Together, we’re working to save them. 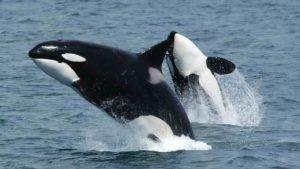 With their sleek black and white bodies, and graceful ocean acrobatics off the coast of Washington and Canada, southern resident orcas are amazing creatures. They’re also starving, dangerously close to the point of extinction. Together, we’re taking action to save them.

As of June, the southern resident orca population had reached a 34-year low, with fewer than 80 in the wild. Why? Because dams in Washington state are keeping the salmon that orcas need to survive from reaching them.

Congress needs to approve removing these dams. But the Senate won’t vote to breach the dams unless Washington’s senators declare their strong support. That’s why we need to let Sens. Maria Cantwell and Parry Murray know that the whole nation wants them to take action to save the orcas.

Over the course of just a few generations, the orcas’ food supply has plummeted. Chinook salmon make up 80 percent of the southern resident orcas’ diet. But since the construction of the Lower Snake River dams, Chinook salmon populations have dropped alarmingly.

By removing the dams and restoring the Lower Snake River, we can restore the Chinook salmon to the area and help orcas survive into the future.

So far, more than 15,000 Environmental Action supporters have sent messages to Washington’s senators. Will you join them?