Giraffe body parts are being sold in the U.S. And it’s legal.

Giraffe body parts are being sold in the U.S. And it’s legal.

The tallest animal on the planet is in peril.

Not only has the wild giraffe population declined 35 percent in the last three decades, but their hooves, horns, skin and other parts are being imported into the U.S. and sold. And it’s legal.

According to a new study by the Humane Society and its international affiliate, nearly 40,000 giraffe parts (representing nearly 4,000 individual giraffes) have been imported into the United States in the past decade alone.

It’s a tragedy to lose any creature. But to sacrifice these vulnerable giraffes to be turned into boots, rugs, book covers and other goods is unconscionable. That’s why Environmental Action is working to list giraffes under the proven protection of the Endangered Species Act (ESA). 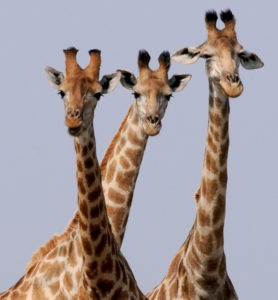 And it’s made worse by the grisly trade in thousands upon thousands of giraffe parts.

Listing giraffes as endangered would:

• Effectively end the importing of giraffe parts into our country,
eliminating a large market for dead giraffes.

• Encourage other countries to enact bans on giraffe part imports.
We know we can win on this with enough support. Last year, we
succeeded in preserving critical protections for wolves when
Environmental Action members like you sent more than 25,000 messages to Washington, D.C., along with many more phone calls and social media calls-to-action.

We can do the same for giraffes. To date, more than 20,000 Environmental Action supporters have called on the U.S. Fish and Wildlife Service to list these giraffes under the proven protection of the ESA. Now, we’re amplifying this message to more wildlife defenders, to convince federal officials to save giraffes.