By Marcia Eldridge, board member

After no calves were born last season, seven newborns is an important milestone. But experts warn that they need to deliver 16 to 18 calves per year in order to sustain the species and avoid extinction.

Human activity is the biggest threat to North Atlantic right whales. That’s why we’re opposing disruptive and damaging seismic blasting. We’re also supporting the SAVE Right Whales Act, which would encourage projects between states, organizations and industries to minimize the impacts humans have on these whales.

Together, we can protect these gentle giants 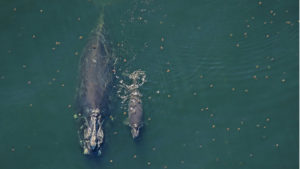