To Justice: My Week With The Delta 5

To Justice: My Week With The Delta 5

Click here to chip and support the Delta 5 and climate action!

Last week in a small courtroom of a small county just north of Seattle, Washington, one of the most important court cases played out that may very well shape the future of civil disobedience in the climate movement. By now, many people know about the Delta 5: Abby Brockway, Michael LaPointe, Patrick Mazza, Jackie Minchew and Liz Spoerri, who risked their lives, freedom and economic security to block a bomb train from departing a Burlington Northern Santa Fe (BNSF) rail station. 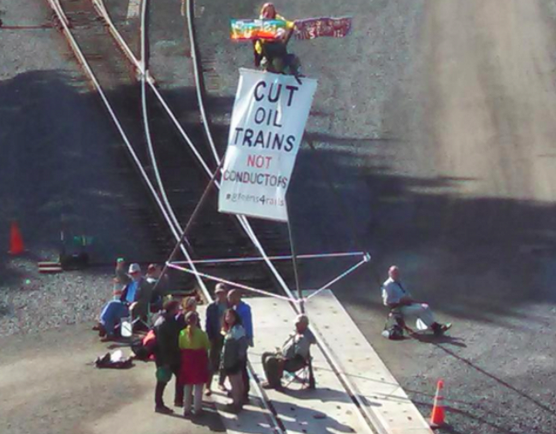 This case was historic because it was the first time in a US climate disobedience trial that  a judge allowed evidence based on the “necessity” defense. This defense permits a person to act in a criminal manner when an emergency situation compels them to avoid greater harm — like breaking a window to rescue a baby from a burning building. This is a huge development for the entire movement of climate activists who have come to the conclusion that direct action and civil disobedience, in the vein of Ghandi, Martin Luther King and the Black Lives Matter movement, is essential to prevent the worst effects of climate chaos. And as I learned during a week of observing court cases and spending time in the churches and homes of the Delta 5, their mission was a moral one engendered by a higher authority. 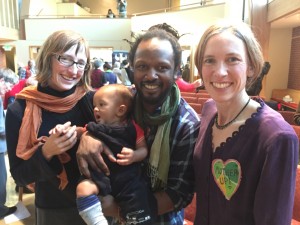 Me, Abby, my son Zahir and his mom Taleigh at Woodland Park Presbyterian Church

My week with the Delta 5 began last Sunday when I attended Abby’s church, Woodland Park  Presbyterian Church,  a congregation known for its staunch dedication to social justice. The pastor arranged for a special service to bless the Delta 5 ahead of their trial — and it was the first time I got to hear Abby speak and explain why she had to do what she did. Her words themselves were like a sense of ultimate gumption, and even though it was clear to me that she did not seek the spotlight, her message was illuminating. It was these words in particular that grabbed my attention and made me realize how powerful their action was. Not so much because of what it delivered, but more so because of where the inspiration came from:

“We did not do this to become the hero or to become the savior we did this because we saw trouble. We were compelled to move toward the trouble so that we could tell the truth. We felt we had to trespass on those who are trespassing against us because we saw no other thing we could do to stop what is happening to the generations that come after us. Each of us have come to points in our lives where we simply could not be complicit any longer.”

With those words, the blessings of the church and many in the climate justice community, the Delta 5 were ready to take the stand and prove to the world why it was necessary for them to do what they did.

The first day of the trial was mainly administrative with the Judge, Prosecution and Defense concentrated on selected a seven person jury. The jurors were asked a range of questions ranging from their belief in climate change to if they know anyone who works with BNSF. In relatively short time, a jury was selected and the case could officially get underway, with opening arguments set for Tuesday morning. It should be also noted that one of the Delta 5, Patrick Mazza, elected to represent himself despite being urged not to by the presiding judge. Mr. Mazza explained his reasons for defending himself, chief among them, to allow the jury to hear directly from one of the Delta 5 in opening and closing arguments.

The remainder of the case included testimony from the Delta 5 themselves, expert witnesses including climate scientists and oil train safety experts and even a former BNSF employee who became a whistleblower and testified to BNSF’s lack of regard for public safety. The Defense presented an excellent case and adroitly demonstrated why the necessity defense was applicable and the jury should be consider it during their deliberations.

On Thursday, with testimonies completed, including a passionate testimony from Abby who explained how close the oil train route was to her daughter’s school and home, the court was ordered in recess as the judge considered how to instruct the jury. When the judge returned he offered his thoughts about the entire situation, stating that he understood why the Delta 5 felt civil disobedience was necessary and that more work like theirs is needed. He then explained the four parameters that  must be met for the necessity defense to apply:

The judge concurred that the Delta 5 met the first three parameters. However, he concluded the fourth parameter was not met and therefore instructed the jury to disregard the expert testimony they heard as part of the necessity defense.  This determination was a huge blow to the defendants, because without both the testimony of witnesses who spoke to the reality and dangers of climate change and oil trains the Delta 5 seemed to be sitting ducks for a jury set to announce their verdict the next day. 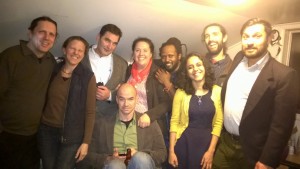 That evening I spent time with three members of the Delta 5 as well as Tim DeChristopher, Ken Ward, Marla Marcum and Jay O’Hara from Climate Disobedience. We were all a bit nervous about what would occur the next day and disappointed that the necessity defense was no longer an option. But we also discussed the need for more direct action and civil disobedience in the face of a political framework where lawmakers seem to address climate change with no sense of urgency, no moral compass and the idea that we still have time to implement an “all of the above” energy strategy.

The next day while driving up to the courthouse with my friends Emily Johnston (350 Seattle) and Ahmed Gaya (Rising Tide Seattle) we got news of the verdict: Not Guilty for obstructing a train, Guilty of trespassing. That was amazing enough, but what was even more amazing was what I saw when I got to the courthouse: Two of the jurors speaking with Abby, explaining why they chose to find them not guilty of obstructing a train and how moved they were by the Delta 5, their testimonies and their commitment to climate justice. I was also able to interview one of the jurors who chose to be identified as “Juror #12.” My interview with him was equally amazing as he revealed that before the case he had a very “casual attitude” about climate change, that the case “opened his eyes and heart,” and that he would be, “getting involved in some way to act on climate.” Abby even got one of the jurors to take the climate disobedience pledge.

What the Delta 5 demonstrated is nothing short of extraordinary. They showed why it is sometimes necessary to take drastic measures to fight one of the most radical threats to humanity. But they also showed that non-violent civil disobedience can change hearts, change minds and inspire people to act. Their temerity and valor was so moving, we decided to honor the Delta 5 by naming and recognizing them as Knights and Defenders of the Climate. This is the first time we have ever given such an award, but as I mentioned to Abby, it certainly won’t be the last time as more and more defenders of the climate are inspired to protect out planet, families, loved ones and futures. 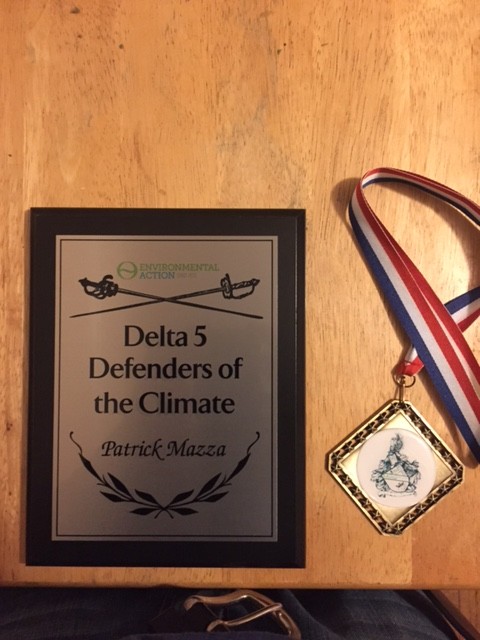 The commitment, sacrifice and valor of the Delta 5 does not come for free. They were found guilty of trespassing and still have to face a restitution hearing. And you can bet that BNSF will try to rake them through the coals, especially since the Delta 5’s action was so inspiring to so many. That’s why we are teaming up with our friends from Climate Disobedience to raise funds that will support the Delta 5 and other actions. You can check out a video with highlights from the week and support the Delta 5 by clicking on the image above.