In what can only be described as a Shakespearean tragedy of paradox, this week the Senate Environment and Public Works Committee convened a hearing to consider an update to the 1976 Toxic Substances Control Act (TSCA). The bill, S 697, was introduced by Senators Tom Udall (D-NM) and David Vitter (R-LA). You could say that the paradox, or at least confusion, begins with Senator Udall co-sponsoring the bill.

Tom Udall has long been considered an environmental champion since he led the fight against oil drilling in the Arctic National Wildlife Refuge and pushed through legislation to establish new federal wilderness areas in his home state of New Mexico. Udall even has a lifetime League of Conservation Voters score of 96%. So many were flummoxed to learn that he is now a chief sponsor of a chemical industry bill that has been described as “protecting profits over public health.” What gives?

As is sadly and so often true, if you want answers simply follow the money trail. The chemical industry rewarded Udall with tens of thousands of dollars in campaign contributions and even ran a television ad on his behalf in 2014.

So how bad is, S 697, the proposed update to TSCA? According to Senator Barbra Boxer (D-CA): “I’ve never seen in all the years I’ve been here such opposition to legislation.” Boxer may have a point. Over 400 groups and eight Attorneys General have written letters in opposition to S 697. Our friends at Physicians for Social Responsibility were one of these groups, and they prepared a comprehensive list of S 697’s many flaws. 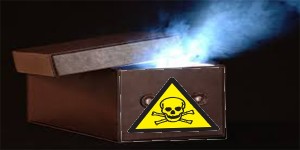 But it’s the opposition of the eight Attorneys General that really open sup Pandora’s Paradox Box. The 10th Amendment to our Constitution says that powers not delegated to the Federal government are reserved for State governments. In other words, since the Federal government hasn’t updated TSCA since the 1970s, the states have authority to set their own regulations — and many have done just that. But under S 697 states would have to wait as long as 10 years before they can take action on unsafe chemicals. Equally troubling, under S 697 would undermine states’ ability to phase out chemicals deemed a risk to public health.

The paradox is that, Udall aside, most of the senators who back S 697 are Republicans — A political party that perpetually warns of the “dangers” of big government trampling the rights of our states. But in the case of toxic chemicals, where the states have been taking more action than the Feds, these senators want to eviscerate state power in favor of a weaker federal system. That would give the chemical industry more time to flood our markets with toxic substances without scrutiny or oversight. Can you imagine how some of these lawmakers would feel if the federal government wanted to impose a national healthcare policy that overrode some state plans? Oh wait, you don’t have to imagine.

Blocking s 697 will be an uphill battle, but Environmental Action is ready for the fight. Stay tuned for updates on actions that we plan to take with our friends at Physicians for Social Responsibility and others to stop this toxic prospect. States should not be punished for taking steps to protect their citizens, and we plan on taking this case to the hill and beyond.