The Youth Are Alright, But They’re Also Fed Up

The Youth Are Alright, But They’re Also Fed Up

By Environmental Action #ourgenerationourchoice, climate change, Obama, results, youth Comments Off on The Youth Are Alright, But They’re Also Fed Up

Our Generation Our Choice DCOn November 9th, 1,000+ young people swept over Washington, D.C., in an epic demonstration of unity, for justice on race, climate and immigration.This is the kind of broad, deep organizing we need to change the landscape of what’s politically possible in this country. #OurGenerationOurChoice

The event, which we helped organize with our friends 350.org, Million Hoodies Network, United We Dream and Divestment Student Network brought together young folks to demand justice on race, climate change, and immigration. The Our Generation, Our Choice day of action highlighted the feeling that our political system is failing us, so we’re taking these crises into our own hands. And they sure did show our lawmakers and the world that they are not only ready,  they’re not going to wait any longer. 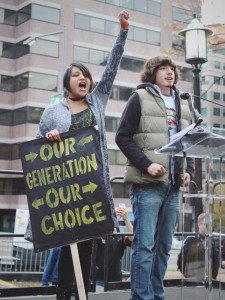 Our day started with a spirited gathering at D.C.’s Franklin Square where we heard diverse speakers’ personal stories about why they were there and what they are fighting for. We heard from our First Citizens who traveled all the way from North Dakota to say that they’re tired of injustice that continues to opress their people.

Then there was Devonte Torrien of the Million Hoodies Network who spoke about being sick of living in fear of police brutality and the execution of young black women and men. Devonte even used a good portion of his speech to read the names of some of the black women who have been killed in police custody, never to be forgotten by us, but too often overlooked by the media and their country.

Finally, my new friend Erin Bridges got the crowd ready to take the streets with an impassioned speech about coal mining and mountain stripping Kentucky. These practices are literally killing people and stealing the choice of a healthy life from the next generation. 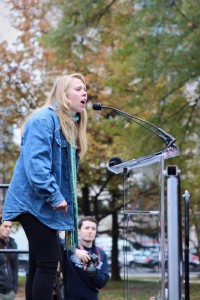 After the park, we took to the streets, shutting down traffic at major intersections from K Street to the White House, where we blocked traffic and used chalk (bio degradable, but visible!) to share our messages about climate justice, racial justice and immigration reform.

This amazing event sent a message to our lawmakers and anyone who believes the youth aren’t ready to lead. In fact, they’re more than ready: they’re willing to do what is necessary to take their country back from special interests and politicians.

On behalf of all of us, and all the youth at yesterday’s rally, thanks for being a part of this kind of Environmental Action. And a special thank you to all of the members who donated to bus these activists to D.C. You assisted with making this event happen, and you assisted with showcasing the future of our nation.