The Senate is moving (to stop the Bomb Trains)

The Senate is moving (to stop the Bomb Trains)

By clincolnp #bombtrain, action, Big Oil, bomb train, climate change, Obama Comments Off on The Senate is moving (to stop the Bomb Trains)

Good news: Senate Democrats have heard our call for action to ban the bomb trains! Yesterday, four champions for the planet and public safety sharply criticized the lack of White House and Department of Transportation action to ban shipments of crude oil by rail as they introduced their own plan to improve safety and prevent bomb trains from exploding or spilling oil.

But as pleased as I am to see these senators act, their legislation is not likely to stop the next accident. The Senate is about to leave on a two week recess and has barely passed any laws this year at all. If we’re serious about stopping the next accident BEFORE it happens, we need the White House to act fast. And we can’t settle for incremental improvements like better breaks and thicker tank cars — many of the recent accidents occurred with such “safer” oil cars.

Will you tell your friends about this campaign, and ask them to join us, these Senators and millions of Americans in calling on the White House to ban the Bomb Trains — NOW! 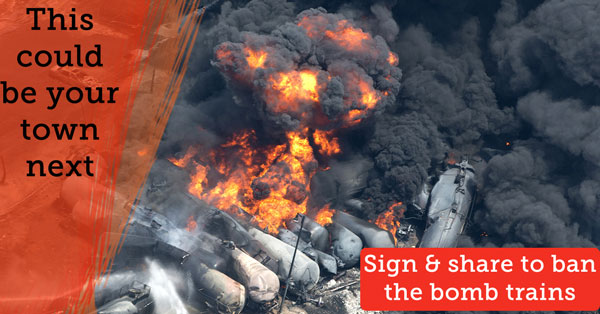 The Senate legislation — Sponsored by Sens. Cantwell of Washington, Murray of Washington, Baldwin of Wisconsin and Feinstein of California, all Democrats — still focus on better breaks, safer cars and incremental improvements to the volatile products being shipped. It’s an improvement on the lack of current rules, to be sure. And it takes the important step of addressing a key point we’ve been making to the White House all along: Bakken crude and Tar Sands oil are simply more volatile than other dirty fuels.

But none of that is as simple, or perfect, a solution as simply leaving these extreme energy sources in the ground. And even mentioning how dangerous these fuels are has drawn opposition by the same train moguls and Big Oil companies that have bottled up the White House rules.3

It’s great to have new allies who recognize the danger of these Bomb Trains. But we can’t wait for our broken Congress to stop the next explosion. Click here to tell your friends the truth about bomb trains, and ask them to join us in calling on the White House to act NOW.