When I received the news of Associate Justice Antonin Scalia’s passing this past Saturday, my mind went in a thousand different directions, accompanied by a thousand different questions. There can be no doubt that Justice Scalia’s sudden passing sent a shock wave throughout the nation, and the entire world. For the first time in over thirty years, the Supreme Court of the United States (SCOTUS) has the potential to be tilted from a 5-4 conservative majority to, at the very least, a more moderate bench. That will have serious implications for pressing issues from racial justice, to a woman’s right to choose, to immigration and how our nation will address humanity’s greatest challenge: climate change. The near term prospects are equally serious, and uncertain.

In an unprecedented move, last month SCOTUS issued a stay on President Obama’s Clean Power Plan (CPP), which effectively delayed implementation of our nation’s first-ever rules to limit global warming from power plants. While the case still needs to be heard, Justice Scalia voted with four other Justices to issue the stay. And all indications based on his record say that he would also have ruled to strike the Clean Power Plan down altogether. Such a ruling held implications for the whole world since the CPP is a major component of our promise in Paris last year as part of to the historic global climate deal.

Now there are only eight judges on the Supreme court. This is a huge deal because if the Court divides evenly (a 4-4 ruling) on a case, the lower court’s order stands. This opens up the possibility that big decisions on the Clean Power Plan, clean water and more, could end in a tie.

And judging by the recent comments of Senate Majority Leader Mitch McConnell, this may remain the case until the next president takes office. All eyes therefore turn to the DC Circuit Court, who are scheduled to hear the CPP case this summer. In the meantime, the timeline for states to comply with the plan is in limbo: States were supposed to submit draft plans to EPA by September of this year. Now they have until the District court rules, and maybe a Supreme Court as well — a SCOTUS without enough justices to rule 5-4 in either direction.

It’s not clear a nine-member SCOTUS with Scalia would have struck down CPP. They have already ruled on three separate occasions that EPA has the right and responsibility to regulate global warming pollution. What is clear is that if the DC Circuit upholds Obama’s CPP this summer, Big Oil, King Coal and other players in the fossil fuel industry will appeal the decision to SCOTUS. And that a 4-4 ruling by SCOTUS without Scalia would result in a sort of legal limbo at a moment when we urgently need action on climate change.

Which is why it’s imperative that the highest court in the land isn’t essentially playing the equivalent of a man-short. It would be unprecedented, if not irresponsible, to have a SCOTUS vacancy for over 300 days. While Senate Republicans and Presidential candidates have called on President Obama to hold off on nominating Scalia’s replacement, ironically they would be asking him to do something they accuse him of all the time — acting against the legal framework of the U.S Constitution.

Stay tuned for more information on our plans to demand that our Senators do their jobs, adhere to the Constitution and stop kicking the climate can down the road. 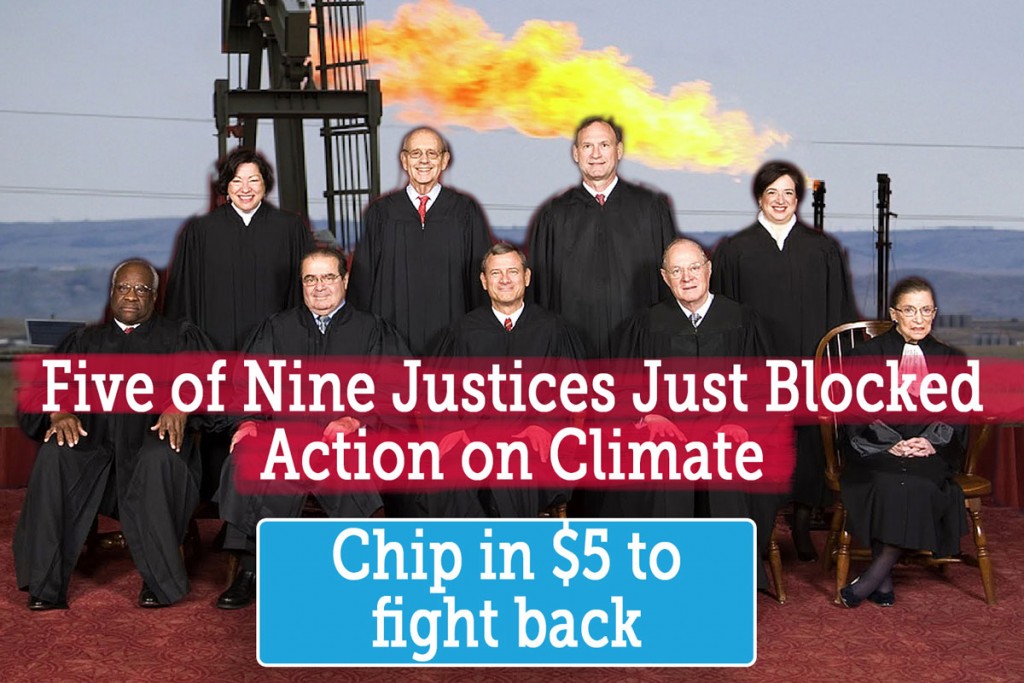