Sympathy For The Bottom Feeder

Sympathy For The Bottom Feeder

By Kirk Weinert Comments Off on Sympathy For The Bottom Feeder

The Trump Administration wants to slash funding to clean up the Great Lakes, well before the job is done. What’s puzzling is the nature of their game. 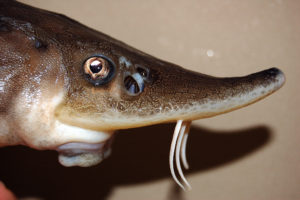 What does it take for a fish to get served around here? Photo by A. Muir, Great Lakes Fishery Commission

Bottom feeders don’t get no respect.

You usually see the term next to words like low-life, loser, parasite, scum of the earth, and slumlord.

But I want to come to the defense of a particular set of bottom feeders:

The fish who inhabit the depths of the Great Lakes.

My plea is prompted by two events.

The first is a proud Facebook post by my wife, on the occasion of our 12 year-old daughter’s reeling in a largemouth bass off a dock jutting into Lake Erie.

Having grown up in the not-too-long-ago days when eating Lake Erie fish was a form of suicide-by-industrial-poison, I replied that I was glad the fish didn’t have two heads.

To which my wife responded, “we still don’t eat harbor bottom feeders.”

The second is a single line item in the Trump Administration’s recently-released FY19 budget for the Environmental Protection Agency.

The budget calls for immediately ending 90% of the funding for the Great Lakes Restoration Initiative.

The Initiative has spent $2.5 billion in the past eight years to make the Great Lakes more swimmable, drinkable, and fishable.  No wonder it’s one of those government programs beloved by folks of all parties, genders, and ages.

If, by chance, President Trump has been silently checking out my Facebook page, he might justify the budget cut by pointing to my daughter’s big, healthy-looking fish and saying “our job is done here”.

On behalf of the Great Lakes’ bottom feeders, I object.

The job won’t be done until kids like my daughter can enjoy what their great-grandparents took for granted:

Pulling up — without fear or revulsion — a lake sturgeon, a quillback, a black buffalo, a golden redhorse, a longnose sucker.

By all scientific evidence, we’re a long way from that point. Just maintaining the progress already made is a daunting task.

The current annual budget for the Great Lakes Restoration Initiative amounts to ninety cents for each American.

My daughter would gladly break open her piggy bank to pitch in our family’s $2.70.

Join me in asking Congress and President Trump to do the same.