Putting a Nail in Coal’s Coffin

Putting a Nail in Coal’s Coffin

The White House just announced a halt to new coal mine leases on federal lands while they conduct a comprehensive review of how coal impacts our economy and climate. Since coal is in decline and a major source of global warming pollution, there’s every reason to believe this is another big step by the Obama team towards abandoning the “all of the above” energy policy in favor of a keeping fossil fuels in the ground and funding a rapid, just transition to 100 percent clean power.

It’s already being called a “nail in the coffin” of the rapidly dying coal industry because 40 percent of coal produced in the U.S. comes off federal lands. It also begs the question: “who’s next?” If Keystone XL was too damaging to our climate to build, as the President has already said; And if coal mining on federal lands is too dirty for the energy future we need to build — will an end to leasing offshore oil reserves be next? What about a ban on fracking for gas on public lands?

There’s no denying, this is a big step for our movement to end fossil fuels. But it’s only a step — the kind we hope to see the President take more of during his last year in office. Can you send a message of thanks and encouragement to the President’s team right now so they know we support his plan to stop leasing public land for coal mining, and are counting on him to keep at it until ALL fossil fuel extraction on public land is banned. 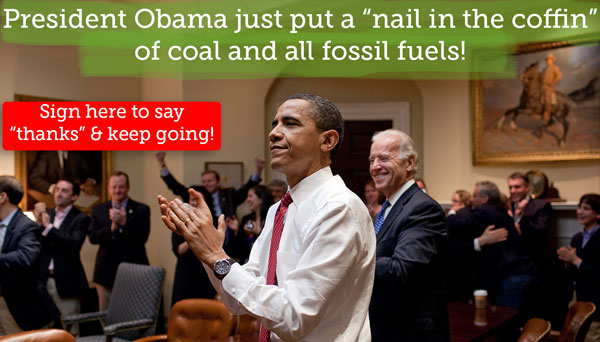 In his final State of the Union speech on Tuesday, President Obama said, “Rather than subsidize the past, we should invest in the future — especially in communities that rely on fossil fuels. That’s why I’m going to push to change the way we manage our oil and coal resources so that they better reflect the costs they impose on taxpayers and our planet.”

We had no idea at the time just how far and how fast he intended to move. With today’s ruling the President stepped past climate-deniers and do-nothings in Congress to take real action protecting our health and the health of the planet.

This isn’t just about winning the war on coal — it’s a warning to all fossil fuels that the end is nigh. Now is the time to thank the President, and also to turn up the pressure to stop offshore drilling, ban fracking and end fossil fuel extraction on our public lands. In a few years we may even look back on this as the moment when the Keep it In the Ground movement officially became the position of the U.S. government.

Can you send a message of thanks and encouragement to the President and then share with everyone you know?