Our path to defending the Arctic Refuge, explained

Our path to defending the Arctic Refuge, explained

By Environmental Action arctic, Arctic National Wildlife Refuge Comments Off on Our path to defending the Arctic Refuge, explained

The Arctic National Wildlife Refuge is one of the last remaining swaths of pristine wilderness in the United States — and we recently won a crucial step in our campaign to defend it from oil and gas projects!

Environmental Action has been working to defend the refuge from oil and gas projects, and we just won a crucial step in our campaign! On Inauguration Day, President Biden temporarily halted oil and gas leasing activities in the Arctic Refuge.1

We’re nearing the finish line on our years-long campaign to protect the refuge — so our team is taking a moment to report back on where our campaign stands after this good news. 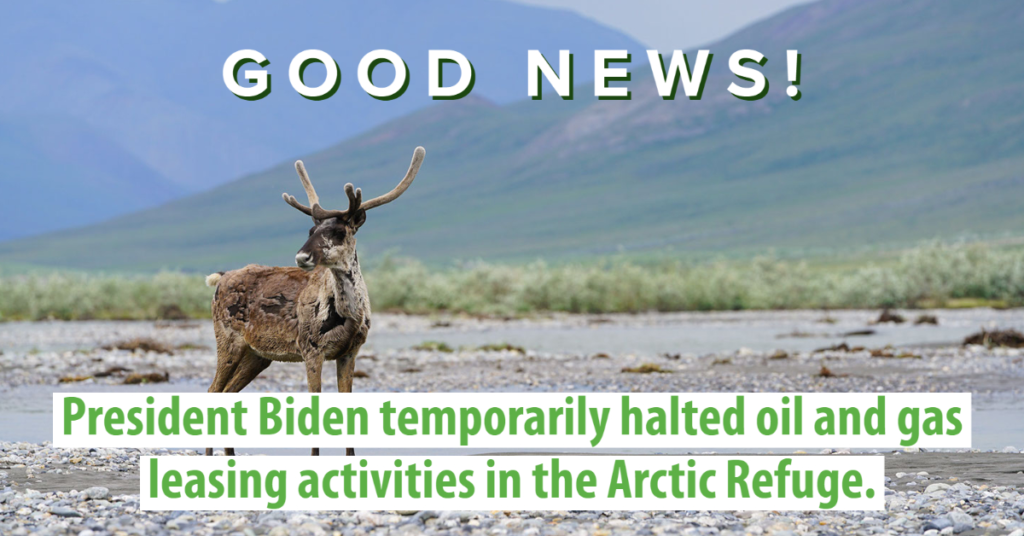 The state of Alaska holds leases in the Arctic Refuge.

The Trump administration held its lease sale on Jan. 6, and the state of Alaska bought most of the leases — but President Biden’s executive order temporarily halts all leasing activity in the refuge.2

Now, it is up to Congress to permanently protect the Refuge.

The Arctic Refuge’s coastal plain was first opened to drilling by Congress in 2017. Until Congress votes to permanently protect the refuge again, it’s not safe from oil and gas projects.3

But the public is on our side, and we know our advocacy works.

Environmental advocates like you have shown companies that drilling in the Arctic Refuge is unacceptable. In fact, every major U.S. bank has refused to fund drilling in the Arctic due to public pressure.4 Additionally, on Jan. 28, the Office of the Comptroller of the Currency put a hold on the Trump administration’s rule that would have forced banks to fund Arctic drilling.5

If we maintain this public momentum, we know that we will win this campaign.

The Environmental Action team is working to defend the refuge by calling on U.S. senators to permanently protect the refuge and demanding that Chevron commit to refrain from Arctic drilling.

We’re so close to winning permanent protections for the Arctic National Wildlife Refuge — and all of our success is due to support from people like you. With your continued support, we know that we can save this beautiful place.