Offshore drilling is inherently dangerous, and spills can have devastating impacts on ocean wildlife. Will you stand with us by telling President Trump and the Bureau of Safety and Environmental Enforcement not to roll back important drilling safety regulations? Submit your public comment today. 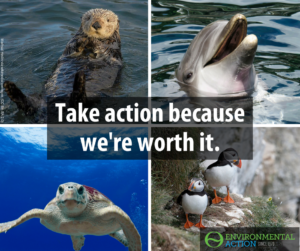 That’s why we need to stop all new drilling. In the meantime, at a minimum, we need safety regulations.

This should be common sense — spill after spill we’ve learned this hard lesson. But now, the Trump administration is planning to roll back federal safety regulations for offshore drilling operations.1

The rules President Trump’s administration is revising were enacted in the wake of the 2010 Deepwater Horizon oil spill, and are meant to prevent the kind of disaster we saw then.2

And when we drill and spill, it has devastating effects on ocean wildlife. Everything from hypothermia in seals, to damaging the internal organs of sea otters, to causing reproductive harm in orcas.3

Already, thousands of you have spoken up against any expansion of offshore drilling. But now we need to speak up in favor of these safety regulations before they are rolled back.

Removing these safety regulations and increasing oil drilling will lead to more oil spills. More spills that can wreak havoc on our coasts and the animals that live in our oceans.

The future? Renewable over risky, daring over dangerous.

We have the power to produce energy without oil. From solar to wind power, there are other sources that can produce enough energy to power our country. But we don’t get there if we’re focused on how to drill more at any cost.

It makes no sense to risk our sea animals for just a little more oil.

Rollbacks of regulations meant to stop another oil spill like Deepwater Horizon are reckless. Let alone opening more water to offshore drilling. That’s why we need you to take action now.

Tell President Trump and the Bureau of Safety and Environmental Enforcement (BSEE) that we need safety regulations for offshore drilling — we shouldn’t roll them back.

The deadline is January 29, 2018. Submit your public comment here.