Meet one of Yellowstone’s wolf packs

Meet one of Yellowstone’s wolf packs

By Environmental Action gray wolves, wolves Comments Off on Meet one of Yellowstone’s wolf packs

If we took a look inside a wolf pack, what would we see? 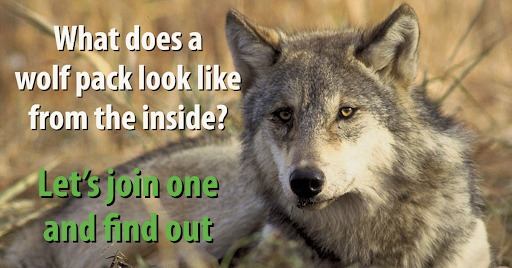 Many expect to find a strict hierarchy — alpha wolves on top, omegas on the bottom. But the reality isn’t quite so straightforward.

Packs aren’t gangs led by domineering alphas — in reality, they’re cooperative families.1 And the way these families form and operate can tell us a lot about these charismatic canines.

To help us learn more, let’s join Yellowstone’s Wapiti Lake Pack and meet some of America’s most iconic wolves.

The life of the Wapiti Lake wolf pack.

The Wapiti Lake Pack’s story starts in 2012 when a male wolf, named 755M by researchers, returned to Yellowstone after years of wandering the Northern Range.

After some searching, he found a female wolf named 899F. At first, he joined her pack, but eventually the pair struck out to start a pack of their own. In 2014, the couple moved to an area near Yellowstone’s border — but before they could truly start their family, the reality of a wolf’s life in America got in the way.

One day, as she wandered the wilds she had claimed as her territory, 899F was shot and killed. She didn’t know it, but she had crossed the boundary out of Yellowstone National Park — and it cost her her life.2

A year later, 755M had settled down with an unnamed female wolf in a valley at the center of Yellowstone — and it was there, in a valley rich with wildlife, that 755M and his partner had their first pups and the Wapiti Lake Pack was born.3

Today, at 13 years old, 755M is an old man — but the pack he started is flourishing. A new mother — a powerful snowy-white female — has taken charge, and she gave birth to litters in 2017 and 2019, helping the pack grow into one of the largest in the park.4

More importantly, the pack has grown because the family knows how to take care of each other — particularly their most vulnerable. As the mother nursed her newborns, the father hunted for the family. After a few weeks, they’d switch roles, and mother hunted while father watched the young. When the pups outgrew the need for close supervision, Mom and Dad started hunting together again.5

The parents take care of the family in more ways than just looking after younglings. After successful hunts, Mom and Dad decide how the food is distributed, taking care to make sure that the youngest pups get what they need. As the pups’ older siblings mature, they’ll often do the same to look out for their baby brothers and sisters.6

For most of the pups from those litters, the family’s care paid off. The tiny pups grew into strong and healthy adults, and by the age of 1 or 2, many set off on their own — in search of a new pack or a partner with whom to start their own family.

The Wapiti Pack has grown strong — but still, it faces danger. In 2018, the pack lost one of its daughters — nicknamed “Mouse” because of her skill in hunting the small rodents — after she succumbed to wounds from a bison hunt.7 And hunters pose a constant threat — with 899F’s fate looming over them all. In early January this year, hunters completely wiped out one of Wapiti Lake’s neighboring packs.8

In the face of these dangers, the Wapiti Lake Pack has shown us that wolves will take care of each other to protect the pack. But they can’t do it all alone — so it’s up to us to continue the fight to protect them.

If our hard work pays off, then hopefully 755M’s offspring will survive for years to come to build families of their own.