By Environmental Action Thneeds Comments Off on May’s Thneed Winner: Nine condiment packets for one burger, corn dog, and fries?!? 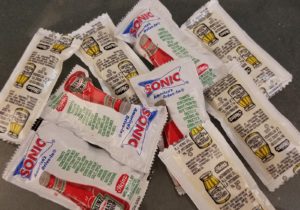 During the past year, I’ve joined countless people around the world in telling drive-through cashiers to “skip the straw.” It’s one of many things — big and small — we can do to discourage the use and waste of single-use plastics.

Cashiers’ reactions to my request have improved remarkably. They’ve gone from “say what?” to “um, OK,” and sometimes I even get an “oh yeah, of course.”

Despite my best efforts, some straws still get through. For example, Wendy’s puts straws into the takeout bag. By the time I notice they’re there, I’ve already driven out of the lot — and it doesn’t take a degree in ecology to know that the environmental cost of driving back to return the straw isn’t worth it.

Yesterday, at my daughter’s request, I stopped at a Sonic Drive-In and ordered a burger, corn dog, fries, root beer and a shake for the two of us. When a server brought us our food, she graciously accepted my “please skip the straw” request and handed us our bag of food.

It wasn’t until we got home that I noticed that the bag included more single-use plastic than was in the straws I declined. There, splayed on the bottom, were nine packets of ketchup and mustard.

I’m not sure what bothers me most about the packets.

Maybe it’s that Sonic’s management (I bet the server was just following orders) assumed that I like and want their ketchup and mustard. (In case any fast food managers are reading this post, I’ve been anti-ketchup since before the Reagan administration tried to claim it’s a nutritious vegetable worthy of a school cafeteria meal. And I’m very picky about types of mustard.)

Maybe it’s that Sonic is quietly charging me for those unwanted packages. Their cost is certainly part of the price for the burger and fries.

Maybe it’s that most of their customers seem to want a handful of packets — or, at least, they used to. Fast food chains are famous for tracking the popularity of everything they do and ditching unpopular items. If they can save a few bucks by cutting back on condiments, they’d probably do it. (For example, McDonald’s recently stopped putting cherries on top of their shakes, reportedly because they found a majority of customers didn’t want them.)

Perhaps, though, it’s because condiment packets have become one of the most obnoxious, messy and unnecessary forms of litter and waste in today’s America.

It’s bad enough to see the little containers on the ground at parks and beaches, just like straws, bottles, cans and bags. But it’s downright depressing to watch birds and squirrels picking away at them, seeking the tasty bright red and yellow contents inside, and, all too often, swallowing the plastic packets as well.

The good news is that Kraft Heinz Co. has announced that it plans to make its ubiquitous packets “globally recyclable, compostable, or reusable.” The not-so-good news is that its avowed deadline is the year 2025.

I can’t find any statistics for how many packets will be handed out in the six years between now and 2025. But here’s a guesstimate:

The average American eats about 3.5 fast food meals per week. If each of those meals is accompanied by just three condiment packets (not every restaurant is as profligate as “Sonic”), U.S. fast food restaurants alone are dishing out  about 180 billion of them each year. That’s 1.1 trillion over the next six years until Kraft Heinz unveils a better alternative. That’s enough to cover a 200-lane Interstate highway stretching from New York City to Los Angeles.

I can’t even imagine what the number is when you throw in all of the other places they’re handed out like candy.

That’s way too much to swallow.

So, while I shouldn’t have to hand back something I didn’t ask for in the first place, the next time I do a drive-through, I’m going to say “skip the straws, please, and hold the condiments, too.”

Please join me in that simple request. A lot of cute critters will appreciate the effort.

In the meantime, I have the distinct honor of awarding the May 2019 version of not-at-all-coveted Thneed Trophy to the fast food chains of the world which distribute plastic condiment packages willy-nilly.