Jumbo The Elephant Has Some Advice For President Trump

Jumbo The Elephant Has Some Advice For President Trump

By Kirk Weinert Conservation, elephant, elephants, trophy hunt, trophy hunting, wildlife Comments Off on Jumbo The Elephant Has Some Advice For President Trump

President Trump is open to advice on whether to allow hunters to bring home elephant “trophies” for their walls and floors. The most famous elephant of all has some thoughts on the matter. 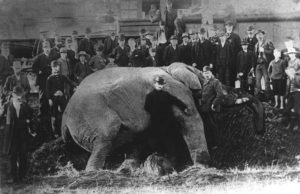 Even in death, Jumbo The Elephant drew a lot of attention.

For a few weeks recently, “The Greatest Showman” — the semi-true story of P.T. Barnum — was my daughter’s favorite movie.

She’s moved onto “The Incredibles 2.” But, even now, I can’t get some of the tunes out of my head, thanks to her putting the movie on repeat for a week.

Something other than the singing, dancing, and melodrama also grabbed my attention. It was the cameo appearance of Jumbo, the world’s most famous elephant and one of Barnum’s signature displays.

I’ve got a special connection to Jumbo The Elephant.

As a freshman at Tufts University, I watched Jumbo’s skin and tusks go up in flames.

His remains had been mounted in our school’s Barnum Hall, the first building that Tufts was contractually required to name after its donor. In a classic Barnum move, he donated Jumbo’s exterior, both for reasons of goodwill and to eternally remind the public that his circus would soon be back in town.

For good luck in exams, it was a long-standing tradition to put pennies in the nostrils at the end of Jumbo’s trunk. But, thanks to an electrical fire, I never got a chance to add my two cents.

However, in death, Jumbo was somewhat of a lucky elephant.

He wasn’t the victim of a big game trophy hunter on an African safari. He wasn’t slaughtered by a poacher interested only in his tusks, leaving the rest of him to rot on the savannah. He was hit by a train in Ontario, Canada, at the the age of 25.

His remains weren’t mounted on the wall or floor of some Hemingway-esque collector’s home or at an exclusive “explorers’ club”. His skin and tusks are now gone , except for some ashes now stored in a peanut butter jar in the office of Tufts’ athletics director. But his skeleton still stands tall at the American Museum of Natural History in New York City. His heart was sold to Cornell University.

And how many individual animals have become a university mascot (the Tufts Jumbos)? How many have been the inspiration for a beloved Disney character (Dumbo)? And how many had their names turned into a common word used to describe things other than themselves? (Not that Jumbo would have noticed or cared.)

A lot of his descendants may not be so fortunate.

If Jumbo could talk, he’d have a thing or two to say about the U.S. Fish & Wildlife Bureau’s announcement that hunters would be allowed to bring elephant “trophies” into the U.S. under certain circumstances. Skins of lions and bonteboks (an antelope relative), too.

“Big-game trophy decision will be announced next week but will be very hard pressed to change my mind that this horror show in any way helps conservation of Elephants or any other animal.”1

But the next week’s decision gave thumbs up to the president’s horror show.

There’s nary a representative of an environmental or prominent animal welfare group to be found.

I’m tempted to call this an example of the fox being put in charge of the henhouse. But that would understate the slyness and stealth of the proverbial fox in getting through the door. Secretary Zinke is being quite open about handing over the keys.

The IWCC met for the second time recently in Washington, DC.

I wish I could report what happened, but I can’t find a word about it. I imagine it was like the first meeting in March when, in the words of Paul Babaz, the Safari Club president, the members discussed “various presentations illustrating the positive effects that hunters have on wildlife conservation.”

For the record, Babaz and his allies are correct in saying that a huge amount of the money spent by governments on wildlife conservation comes from hunters and anglers. (Most is raised via licensing fees and taxes on guns and ammo.) And some of the money spent on the hunt stays in local communities, which might otherwise engage in poaching or habitat-destroying land clearing. On balance, wildlife would be worse off without such funding.

But it doesn’t have to be that way.

There are plenty of other ways to provide the same amount of money, if not more.

It will take dedicating funds from revenue from animal lovers (e.g. zoo-goers, national park visitors). It might require using general funds. And why not? Folks who never venture out of their hometowns benefit from the conservation of wildlife around the world.

But the first thing it will take is a commitment to ending what the president called the “horror show” and a clear-eyed review of the facts on the ground.

We’re not getting that now. And, unless President Trump heeds his earlier tweet and tells Secretary Zinke to reverse course (and there’s always a chance he’ll do so, if enough people raise a stink), it may be awhile before we get it.

In the meantime, we need to think like Jumbo and, when our chance comes to make a difference, to never forget.