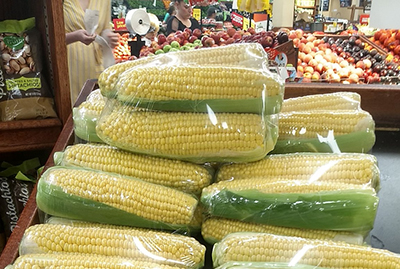 When Mother Nature already provides a perfectly good container, say no to a plastic alternative

My aunt takes me to a roadside stand in rural Wapwallopen, Penn. to buy a bunch of just-picked ears of white corn. We return to my grandparents’ cottage and, along with my brothers, messily shuck the corn in the backyard under a blazing sun.

We toss the husks and silk on the compost pile and dump the ears into the pot of water my Mimi has brought to a boil on the coal-fired stove.

A few minutes later, we’re laughing, picking kernels out of our teeth, and reveling in that marvelous taste of sweet corn, butter, salt and pepper — made more scrumptious by the “work” we had done to make it happen.

For that fleeting moment, Nature and I were one.

Apparently, it seems that the good folks at Kroger Supermarkets think that tearing a plastic wrapper off a corn cob is a comparable experience.

Instead of using a strong, flexible, compostable wrapper that Mother Nature provides for free, they’d rather do a little corn strip tease, expose some kernels for your viewing pleasure, and encase the whole thing in plastic that won’t decompose for seemingly forever.

I don’t mean to pick just on Kroger. Some other supermarkets do the same.

But for spoiling one of my precious memories, Kroger has earned the July 2019 version of the Thneed Trophy. Next summer, let the corn cobs wear their birthday suits and ditch the single-use plastic.

This message is not associated with or endorsed by the creators or the publishers of “The Lorax”.