California could be characterized as Climate Change Ground Zero. Fires are raging in the northern and central parts of the state, the Sierra Nevada snowpack is lower than expected due to a historic drought, and carbon emissions are spewing relatively unchecked due to an increasing population and extreme energy extraction like fracking and drilling. Not to mention the unequal distribution of climate impacts on low wealth & communities of color. Just today the National Oceanic and Atmospheric Administration (NOAA) reported that this summer was the hottest on record.

California was also the location of yesterday’s Republican Presidential Debate. Click here to see a replay of our live chat of the debate with Climate Truth. 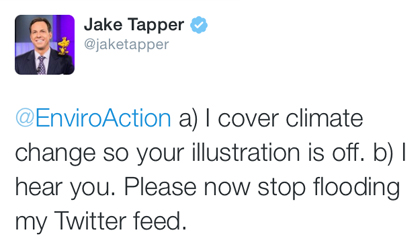 Out of deference to the Golden State you might have thought that Jake Tapper would make climate change a major topic of discussion. You thought wrong — Jake dedicated all of three minutes to the greatest challenge facing our existence, and abruptly moved on after letting only three of the 11 candidates offer perfunctory and vacuous responses. You could even hear Sen. Ted Cruz begging Tapper to let him explain why climate change is a hoax, but Tapper declined.

This is an abject failure on so many fronts. First and foremost, Mr. Tapper actually contacted us directly, assuring us that not only does he discuss the climate, but also that he heard the requests of our members and to, “please stop flooding his twitter account.” 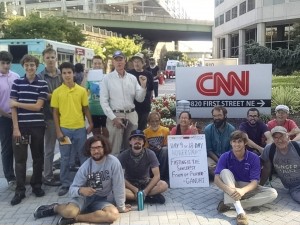 It wasn’t just twitter either. We also delivered more than 52,000 signatures to Tapper’s CNN offices in D.C. with our friends from Beyond Extreme Energy. We wanted to remind the network and Tapper to ask questions about climate just a few hours before he went on air.

In the end it was all for naught. Despite his assurances, and the fact that a majority of Americans want to know where ALL the candidates stand on this issue, Jake Flaked Big Time.

But Tapper was not the only one who treated environmental issues like a comedic variety show. Sen. Marco Rubio’s opening statement even poked fun at California’s drought remarking, “I’m aware California has a drought. That’s why I brought my own water bottle.” The only information we got from Rubio on climate change is “America is not a planet.”

In three hours we heard more about marijuana policy than about climate change policy. But Operation Climate Conversation is not over… it’s just beginning. We will make a point of “flooding” the social media outlets of every network and their moderators for future debates. And it’s looking like we’re going to have to make our voices heard in person at future debates as well. Stay tuned for more information on how you can take action. But in the meantime, we need to let Tapper know that he not only let us down, he let the voters down and definitely let the planet down.