Is GOP Right About The U.S. Leading From Behind?

Is GOP Right About The U.S. Leading From Behind? 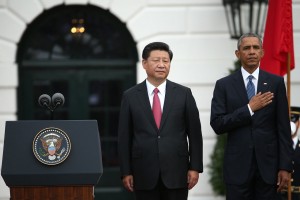 In a joint statement with President Obama, his Chinese counterpart, Xi Jinping also announced plans to commit nearly 3.1 Billion dollars to the Green Climate Fund, which was established to assist developing nations adapt to and fight climate change. Moreover, China also revealed their new policy to “strictly limit” the financing of high-carbon projects, such as coal-fired power plants.

To say that this announcement is epochal would still be an understatement. In addition to setting a standard for Asia and the rest of the world, China has also just sent a shock wave through U.S. climate policy. To this end I must confess that the Republicans, who consistently use the campaign buzz phrase. “we’re leading from behind,” are absolutely correct in the context of climate change. But, in a paradoxical twist, they have no one to blame for this but themselves.

As reported in the New York Times, these recent climate steps all but eviscerates the Republican mantra  of, “acting on climate would be futile because China’s not doing anything.” The GOP’s efforts to block President Obama’s Clean Power Plan, lift the crude export ban, repeal the Green Climate Fund and force passage of the Keystone XL Pipeline are antithetical to the attributes of climate leadership. Not to mention the amount of subsidies given to carbon intensive industries like Big Oil, which receives a whopping $10 to $32 billion annually under GOP leadership.

China’s recent pledges, if honored and implemented, will elevate them as the undisputed global leader of climate change policy, just ahead of the COP 21 talks in Paris this winter. So the burning question is, what will the U.S. do about it? Perhaps this could start a new race to the front of the pack that includes divestment in carbon and investment in green technology, new policies that consider the most vulnerable to climate change and an overall commitment to be a global leader in addressing humanity’s greatest challenge.

But for this to happen it will take more than policy shifts, it will take an entire metamorphosis of our lawmakers’ attitudes on climate change. It will be necessary to make the same bold proclamations that got the U.S. to the moon first, to cure polio first and other innovative strategies that have elevated our country as a global leader.

His Holiness Pope Francis just called on our Congress to take “courageous action” to fight climate change. It would appear China, a country with less than three million Catholics – and likely none in their leadership, certainly got this message. How will our country, with over 64 million Catholics, including many in our Congress, respond to the Pontiff’s challenge, to China’s challenge and to the ultimate challenge of climate disruption?