GOOD News For The Bears

GOOD News For The Bears

Last year we fought and fought to convince Florida Fish and Wildlife Commission (FWC) to #StuntTheHunt of Florida’s Black Bear. You already know they didn’t listen and the result was a Black Bear Bloodbath that took nearly 300 bears from the people of Florida. Worse yet, FWC announced plans to make the hunt an annual event despite not even knowing the accurate number of remaining bears in the state.

When I was interviewed by NPR at a Bear Hunt Monitoring station and saw, first hand, the actual carnage, I made a promise that none of the bears died in vein, and that we would continue the fight to prevent these beautiful animals from becoming extinct. Well I am pleased to say that I was able to make progress on my promise yesterday in Seminole County Commissioners meeting.

Discussion about Florida Black Bears was not even on the Commission’s original agenda — but around 30 Black Bear activists showed up anyway. The Seminole County Commission banned fracking just last month, so we figured they might do the same for future Black Bear hunts.

The Commissioners listened attentively to five people’s testimony, including mine. We explained that despite 75 percent of Floridians opposing the hunt, and despite the fact that the state’s bear census was incomplete and outdated, the FWC moved ahead with a hunt unilaterally. I also warned that if counties like Seminole did not stand up to a runaway commission like the FWC, Florida would be inviting Federal intervention to prevent the Florida’s Bears from being pushed back to the brink of extinction. You can read my full testimony by clicking here.

In an unprecedented event, the Seminole County Commissioners agreed to pass a BEAR HUNT BAN within an hour of our speakers requesting a Bear Hunt Resolution!

The fact that they agreed to pass an ordinance is significant because they are enforceable by law; whereas a resolution is just an official opinion. This was true democracy at work as the Commission came to their conclusion following rational, public requests backed up with facts. There were no closed door, surreptitious meetings. 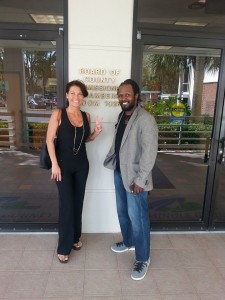 Following our victory we gathered outside of the Commission building, really in utter disbelief — we actually pulled it off. And then I came up with an idea — since we know that we can’t depend on the FWC to follow sound science or the will of Florida voters, what if we did this again and again in other counties to get as many hunting bans as possible?

That’s when I proclaimed to the coalition that I would extend my stay in Florida to start this process. You can help me on my quest to get our voice and pleas to as many County Commission that will listen by clicking here.

It was a great day and with your help we can get even more justice for Florida’s Black Bear and keep this beautiful species around for years to come. Stay tuned for updates on my Florida travels coming soon, and thanks for standing with the bears.