Florida is going to be one of the most important states to watch in 2016. There are a slew of bills being considered in the State Assembly that, depending on if they pass or not, could have major implications for Florida’s future climate, water quality and public health. House Bill (HB) 191 and Senate Bill (SB) 318 would not only expand fracking operations, but would also preempt local communities from instituting their own bans on the extreme practice. Worse yet, counties and cities with existing bans or moratoriums would see them lifted if either bill is signed into law.

This is significant because, currently, 20 counties and 40 cities representing approximately 33 percent of  the state’s population have fracking bans or moratoriums in place. Yesterday about 200 fracktivists from throughout the state arrived in Tallahassee, the State Capitol, to hold the Reclaiming Florida’s Future rally, organized by the coalition Floridians Against Fracking, and tell their representatives face-to-face to block both of these bills. The crowd was pretty fired up and it was great to see the large amount of people who loved the yard signs we designed and provided for the event. 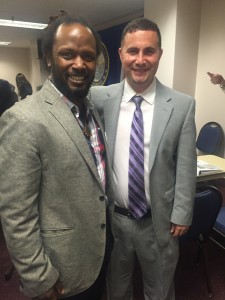 Prior to the event our coalition held a press conference in the Capitol building  where we heard from one of the state’s environmental champions: Senator Darren Soto, who has been fighting the fracking bills and also introduced a bill to ban fracking outright. Mr Soto discussed the dangers of money in politics including the fact that Big Oil has already spent $300,000 to lobby Assembly Members during a session that commenced only two weeks ago.

We also hear from activists who traveled from as far away as Pennsylvania and New York to discuss, respectively, what fracking has done to their state and the benefits and lessons of a statewide fracking ban. It was also great to hear from Beth Osceola, representing First Citizens, who urged lawmakers to also consider the sovereign territory of indigenous people whose land, water and air would be adversely impacted by these bills.

I got to address the crown and highlighted how crazy it is for Florida, a state that gets 90 percent of its drinking water from groundwater sources, and with some of the most sensitive geology in the country, to allow fracking in the first place, much less expand it. My main argument was that the Sunshine State should be leaders in renewable energy sources like solar and that local communities should be able to retain some sovereignty and ability to make decisions that serve them best. You can check out a clip of my speech below.

There is really no time to waste on this issue. As I was writing this, it was reported that the full Florida House of Representatives are set to vote on HB 191 any day now. Apparently some members of the House totally ignored the constituents they spoke to yesterday. Stopping these bills is going to require an all hands on deck effort. This will include billboards in Tallahassee and elsewhere, more yard signs and even radio and newspaper ads. You can support our efforts to foil the Florida Frack Attack by clicking here. In the meantime stay tuned for more updates as this issue is starting to heat up.