The Environmental Movement and Ferguson: From Why to How

The Environmental Movement and Ferguson: From Why to How

I recently attended many of the successful and largely peaceful protest in New York City surrounding the death of Eric Gardner at the hands of the New York City Police Department. On my way home from one of them, I could not help but think about the differences between the protests in New York and those in Ferguson following the death of Michael Brown and the decision not to indict the officer involved in his death. It could be argued that the residents of New York, especially People of Color, should have been angrier about the decision not to indict the officers involved in the death of Eric Garner as his death was clearly documented on videos that went viral. Yet, the protests in New York did not end in looting or the destruction of property as they did in Ferguson…and I believe that there are important reasons why this was the case, and these reasons provide pertinent lessons that offer an opportunity to learn more about what happened in Ferguson and steps the environmental/climate movements can take to demonstrate solidarity with Ferguson and the larger racial justice movement.

First and foremost, one stark difference that I believe led to the overall civility of the New York protests was the response of City Officials, most notably Mayor Bill de Blasio. Mr. de Blasio actually acknowledged that there is a race problem in New York and the country overall. Further, the police presence at the New York protests was largely to ensure safety while allowing citizens to exercise their first amendment rights, and the cops were not dressed in or rolling out equipment that one would associate with the military. Compare this with Mayor James Knowles who initially stated that Ferguson has no race problem and the militarization of the police in that city and the differences could not be more profound. However, the most profound juxtaposition was the sense of empathy evoked by Mayor de Blasio in his recent statements. As the father of a bi-racial son, Mr.de Blasio expressed a genuine understanding of how many People of Color must be feeling right now. I am proud at this time that Mr. de Blasio is my mayor, and his empathy is a lesson for all who wish to stand in solidarity with Ferguson and similar communities across the nation.

As a nation, we have been fixated on the tragedy surrounding the death of Michael Brown and the aftermath following the acquittal of his assailant. The environmental/climate movement, and many others, are currently in a state of deep rumination, wondering why they should show solidarity with Ferguson and similar communities across the nation. In August Deidre Smith of 350.org adroitly and succinctly made a profound case for WHY the climate movement must and should stand with Ferguson. In an effort to expand on her points, and hopefully engender a deeper conversation, I wish to discuss HOW the environmental/climate movement can and should stand with Ferguson. 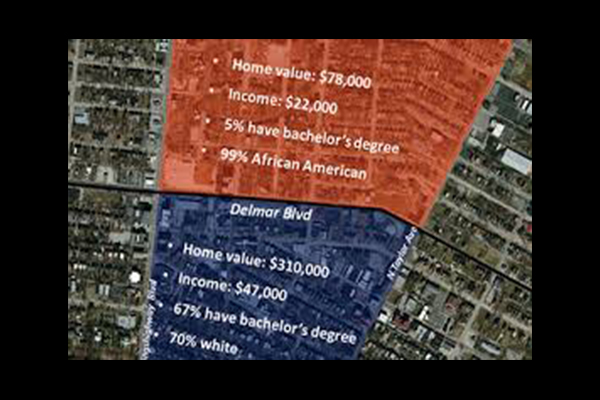 Ferguson and other communities located to north of St. Louis City have experienced a legacy of legal and illegal discriminatory practices that have resulted in a profound separation between White and Black communities. There is literally an equator that separates Black communities to the north and White communities to the south known as, known commonly by locals as “The Delmar Divide.” This separation has resulted in blighted communities of color to the north and prospering White communities to the south. The institutional racism that created the the current divide, through practices such as “redlining”, has led journalists like Victoria Sgarro to conclude that, “Michael Brown’s death and the aftermath are the products of the county’s long held issues of urban decay, geographic fragmentation and racial segregation.“ 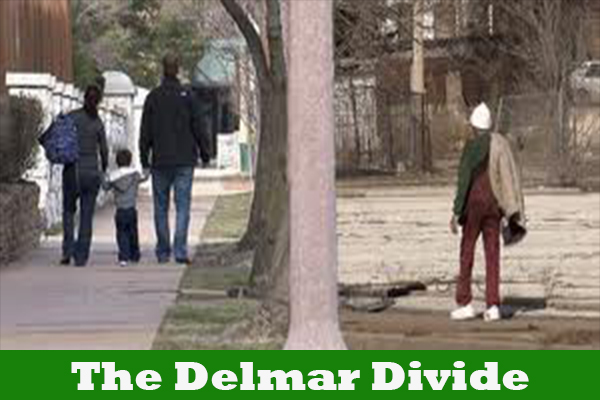 Sgarro in her statement highlights one of the larger issues facing Ferguson, namely human health conditions that are influenced by various factors including, but not limited to economics and access to education and open space.   The link between an individual’s socioeconomic status and their health has been well established by numerous studies.

The concept of ecological health, similar to human health, integrates various ecological, social, economic and political factors. If this is true, then it provides us all with a better understanding of the conditions that likely contributed to a series of unfortunate events that left a young man dead and a community on fire. And this is where I believe the environmental movement can step in to stand with the citizens of Ferguson.

As Ferguson begins the process of rebuilding its community, the environmental movement is presented with an excellent opportunity to offer assistance with this process. We can bring our expertise and help to rebuild Ferguson with Green Infrastructure. Green Infrastructure can be considered to include all natural, semi-natural and artificial networks of multi-functional ecological systems within, around and between urban spaces. If proactively planned, Green Infrastructure has the potential to provide a framework for economic growth and nature conservation. This type of approach also provides various opportunities for integration between urban development, nature conservation and public health promotion.

This speaks specifically to Ferguson because I believe that chronic emotional and mental stress from years of discriminatory practices that contributed to blight, coupled with the acute emotional stress associated with Michael Brown’s death are at least somewhat responsible for the unrest that ensued. If a community is forced to live in a space that has been treated like it has no value, and then one its young people is killed as if he has no value, can we really be shocked when communities react likeplaces, businesses and even the rule of law in their community seem to have no value?  Can we claim to be befuddled when a community angrily demonstrates, sometimes through looting, rioting and property destruction?

There appears to be little sense of connection to a community that has been neglected for far too long.  I am certainly not suggesting a case of post hoc ergo propter hoc in which I conclude that if Ferguson did not experience blight, bad urban planning or offered greater access to open space the unrest after the death of Michael Brown and Darren Wilson’s acquittal would have been avoided. But I am pointing out that epidemiologists have concluded the cultural, psychological and other non-material benefits that humans obtain from contact with healthy ecosystems. This is why so many studies show a clear nexus between human health, well being and access to nature and natural systems.

We must assist Ferguson with realizing this nexus in an effort to improve overall social condtions.  Researcher Joonsub Kim support this idea stating, “Regarding social outcomes of green space, natural features and open spaces in a residential area play an important role in residents’ feelings of attachment towards the community, and their interactions with other residents. On the other hand, green spaces that are percieved to be overgrown or unmanaged may have a negative effect on peoples’ well-being through increased anxiety” (Kim and Kaplan, 2004). Other studies have concluded that access to green space and Green Infrastructure have been shown to enhance residents’ effectiveness in facing their major life issues such as a tragic family death. This makes sense if you think about your own response to personal trauma such as the loss of a family member or a job. Where would you want to go to reflect and heal? Maybe you would want to go to a local park or hiking trail, maybe you have have a personal garden or access to a community garden…somewhere to spend time and reflect. Now think about how you may react to trauma if these resources were consistently unavailable and if the closest thing to open space in your community was an abandoned lot. These are things we must think about to fully comprehend the empathy, similar to that espoused by Mayor de Blasio, required to stand with Ferguson.

I should be clear that what I am proposing is a REVITALIZATION of Ferguson versus GENTRIFICATION. While People of Color experience the effects of climate disruption and other environmental degradation disproportionately, we are conspicuously absent from leadership roles in the environmental/climate movement. Similarly, while 2/3 of Ferguson is African American, its police force and elected officials are majority Caucasian…the outcome of this tragic equation is that African Americans have been largely excluded from making local policy decisions that will affect them the most. We must not allow this to occur when we offer our assistance to Ferguson and other communities, and see ourselves as consultants and facilitators rather than de facto dictators. Rather than tell them what to do, we should allow them to develop and implement their own leadership.

So where do we start? I could not think of a better place than Flood Christian Church, Michael Brown Sr.’s church, which was recently destroyed. Imagine a new LEED certified church that includes community gardens and an environmental education/training center that equips future local leaders with the tools they need to maintain and expand on the revitalization of their community. This could lead to green jobs, which would assist with reducing unemployment like similar programs that have been launched in Washington, D.C.

The possibilities are endless and I believe that this is one of the most effective ways that the environmental movement can stand with Ferguson. I look forward to working with partners like Interfaith Power & Light and others on this prospect; and I hope more environmental organizations will follow. We have a chance to demonstrate that environmental solutions are implicit with racial justice…and it is my deepest hope that we seize this opportunity. Because if black lives truly do matter, then so must the physical environments where they live, work, eat, sleep and play.