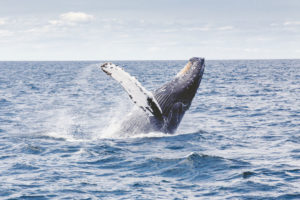 North Atlantic right whales are on the brink of extinction.

Unfortunately, in 2017, scientists found a record number of dead North Atlantic right whales, which they called an “unusual mortality event.” The 2018 calving season saw no new calves, which is not only unprecedented, but could be catastrophic for this species already teetering on the edge of extinction.

Once numbering in the tens of thousands, there are now only 458 North Atlantic right whales on the entire planet.

Among the leading causes of North Atlantic right whale deaths are ship strikes, entanglement in fishing gear, and effects of seismic blasting used to look for offshore drilling sites.

Fishing gear entanglement and ship strikes killed 17 of these whales in just the last year. And even if these whales do not die from entanglement, it can cause elevated stress levels, which have a significant negative impact on calving.

If we don’t act swiftly and concertedly now, North Atlantic right whales could go extinct in the wild by 2040.

But the Trump administration and some in Congress are pushing for legislation that would further harm these creatures instead of working to save them. From bills that would scale back the Marine Mammal Protection Act, to opening more of our coasts up to offshore drilling and seismic blasting, to trying to erase protections for Northeast Canyons and Seamounts Marine National Monument and open these pristine waters to commercial fishing and offshore drilling, the administration is putting special interests over the health of our oceans and the safety of marine wildlife.

Now more than ever, we need to do everything we can to save these precious creatures. And Environmental Action supporters have been taking action at all levels.

More than 26,000 Environmental Action supporters urged the National Marine Fisheries Service to begin emergency rule-making to reduce fishing gear entanglements—specifically calling on the agency to reduce the allowed break-limit on fishing gear so that North Atlantic right whales can better free themselves from potentially fatal entanglements. We’ve also sent tens of thousands of messages to Congress opposing opening more of our coast up to offshore drilling, and defending Northeast Canyons and Seamounts.

We can’t let #3893 die in vain. We can’t lose this species by 2040. That’s why we’ll continue mobilizing our supporters and the public across the country to stand up and push our country to do right by right whales, before it’s too late.