The final agreement at #COP21 is out. It’s a victory simply because this is the first time the world has gotten together and said climate change is real, we all have to do something about it and that means reducing pollution. I’m also proud that a scrappy coalition of low lying island nations (who do not have a lot of power or influence at the U.N. normally), backed by our international climate justice movement, convinced the parties to lower the ‘bottom line’ goal from 2 degrees celsius to 1.5 degrees celsius. That represents a 25% decrease in how much warming is called “acceptable” and will save literally millions of lives if enforced. The most important piece of good news may simply be that by agreeing to something politicians and polluters have now given us a new piece of leverage to use in shutting down politicians and polluters who resist the action we need.

Anthony’s already written a much longer and more detailed explanation of all the reasons the agreement falls short. But the shorter version is simply that in a contract or a treaty, a “red line” is a point or agreement that cannot be crossed. Science and our movement had set red lines for this agreement at leaving 80% of fossil fuels in the ground, and financing a just transition to 100% clean energy by 2050. This agreement blows past those red lines, permitting closer to 3.5c of temperature rise, which is an only nominal improvement on doing nothing at all, which would land us somewhere in the neighborhood of 4.7c.

But here’s why I’m still celebrating: Politicians and polluters were never going to solve the climate crisis. We are. And if you look at the big, boisterous rally we held in the streets even as the agreement was being signed, it’s clear that Paris was a turning point for our movement – and we’re never going to be stopped. Here’s a video to show you why, and more explanation below. And if you want to be a part of a climate movement that WINS, sign on to our red lines demands right here.

Our plan was to form a literal red line with our bodies (dressed in red) and long pieces of red fabric to show that we’re not giving up. Everything about our event was symbolic. Our red line stretched from L’arc de Triumph to the financial district in Paris – showing we know that corporate polluters are to blame, and in control for now, but that the people, united, will be triumphant in the end. We lined up on a street called Le Grand Armee, to show that we are a grand army of climate resistance. And we put indigenous leaders out front, because we know that Climate Justice demands we take action with those most impacted by pollution first, and solve the problem equitably.

It’s important to understand that until about 30 minutes before it happened, this entire idea was illegal. Any event involving “more than 2 people with a political message” has been banned under France’s state of emergency, and all week long we’ve seen protests broken up by armed police with tear gas and pepper spray in a massive curtailing of our civil rights. But at the last minute on Saturday French authorities relented and, for the first time in the two week COP process, a massive rally and protest for the climate was allowed.

We’d made these giant inflatable “cobble stones” to act as soft, gentle, but substantial barricades, in case the police tried to break up the red line event. But since the rally was permitted, they turned into giant toys. We didn’t need to blockade anything so we tossed them around in a fun and hilarious event that brought together a crowd of 15,000 people who didn’t know each other and got us smiling.

And when we laid the red line down in the street, you could see the glittering towers of the investment district just in the distance. These are the people profiting from the climate crisis, and it’s our job to keep confronting them. When the lines were laid down, we left flowers as a memorial to all the victims of climate chaos around the world.

And then we rallied – bands played, we chanted, and we danced in the street. Not for the agreement, which is historic, but not enough. But for our movement – a big joyous celebration of our power, our unity and our refusal to let politicians and polluters have the last word.

Then we headed down to the Eiffel tower where we formed a massive human chain stretching from the peace memorial most of the way to the tower. Hand in hand we marched the length chanting “one, two, three degrees, it’s a crime against humanity” in French and english.

At one point, as a french musician rapped about climate change and the need to fight on, an impromptu dance circle broke out next to me, friends and strangers alike dancing round and round. The agreement isn’t enough, but this movement is. We’re going to stop global warming with our bodies in the street, and hearts and minds on the front line communities hit first and worst by climate impacts and pollution. This is what a revolution looks like, and there’s more to come – including the dancing.

PS – if you support this movement, sign on to our “red lines” right here to stay informed. And consider chipping in a few dollars to support our work with front line activists! 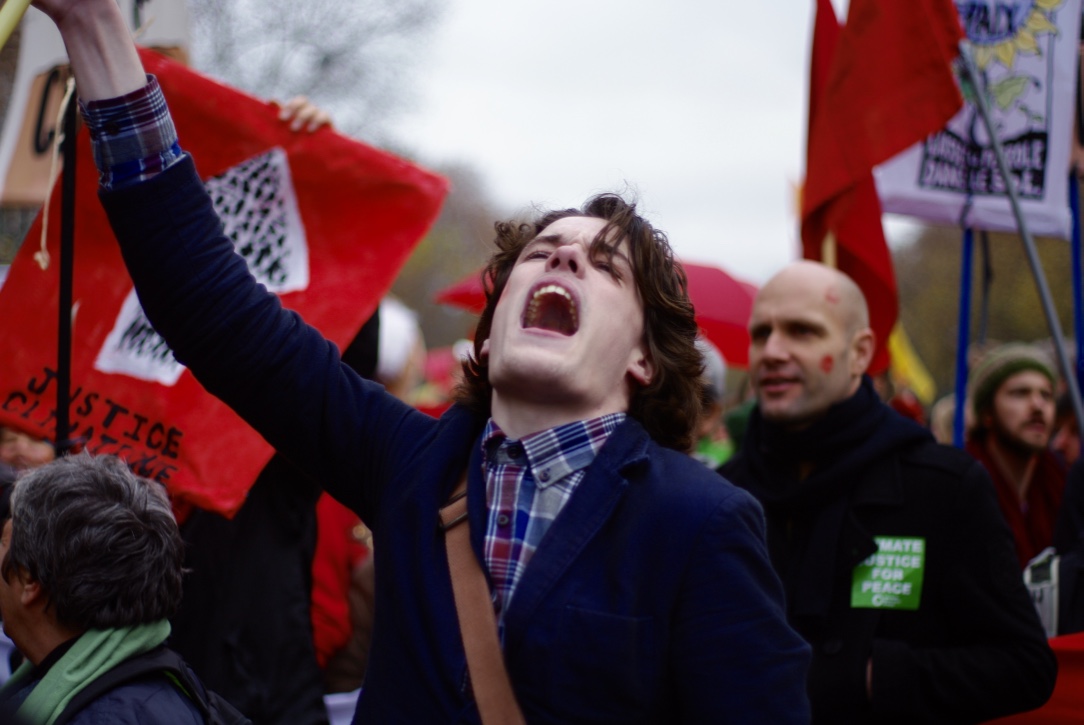