COP20 Kicks The Climate Change Can

COP20 Kicks The Climate Change Can

The United Nations Climate Change Conference recently wrapped up in Lima, Peru producing an agreement between over 200 nations known as the "Lima Accord. On the surface, it appears that the Lima Accord ends an impasse that has prevented the UN from creating a global concerted effort to fight climate change. However, digging deeper, the Lima Accord is more superficial rhetoric than real action. And it's failures expose the growing rift between wealthy and poor nations.

In the end, the spirit of collective global efforts was usurped by individual interests resulting in an agreement that is more "agree to disagree" than a clear plan to keep our planet's temperature from rising 3.6 degrees Fahrenheit. In a word, the accord is weak and every nation will have to do much more to demonstrate to the citizens of earth that we as a global nation are actually serious about climate change.

I don't mean to be the ultimate Debbie downer, but there are so many things wrong with the Lima Accord. Next, we all need to take action to hold our respective leaders accountable ahead of the next Conference of the Parties (COP) in Paris next year.

For instance, many of our leaders and our media continue to refer to climate change as an endpoint. They describe a red line condition that we will reach IF and ONCE our global temperature increases 3.6 degrees. They should instead acknowledge that we are already experiencing the effects of climate change, acutely and chronically. A recent New York Times article suggested that when we hit the 3.6 degree increase, only then will "the earth tip into dangerous and irreversible effects such as melting ice caps, rising sea levels, increased flooding, food and water shortages and extreme storms." News flash: these conditions are already upon us, and some nations are already making impossible plans for when these conditions worsen. 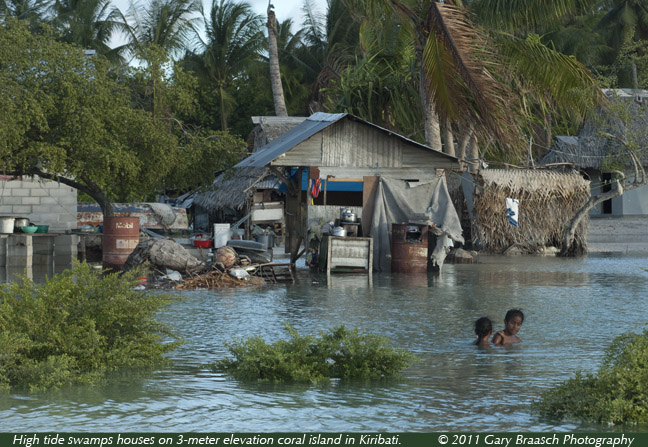 Take Kiribati, the small island nation in the south pacific that has been so devastated by climate change events, it has been forced to purchase land in other countries to preserve fresh water, arable farmland and their culture. These situations are why the U.S. and other wealthy nations need to assist poorer nations with funding to adapt to climate change and develop low-carbon, renewable energy sources. Malaysian delegate Guardial Sing Nijar evoked this masterfully when he stated: "We are in a different stage of development. Many of you colonized us and we started from a different point. Those red lines were not addressed in the text [of the Lima Accord]."

Accountability is a key variable missing from the recent Lima Accords. A bloc of nations known as Like-Minded-Countries (including India and China) as well as a number of oil-developing nations such as Saudi Arabia and Venezuela took umbrage with the idea of aggressive outside monitoring and verification of each country's plan to curb climate change. By settling for Intended Nationally Determined Contributions (INDCs), the Lima Accord essentially allows each country to subjectively determine what steps should be taken to reduce their nation's emissions of global warming pollution. I believe this will ultimately lead to more finger pointing and confrontation in lieu of collective solutions. To this end, Paul Bledsoe of the German Marshall Fund is correct when he said, "The really difficult issues — financing, adaptation, monitoring and ultimate emissions reductions — are left to be ironed out over the next 12 months."

When it comes to climate change, we need to embrace a Yankee Fan's mentality: World Series or bust. There are no trophies for second place at the professional baseball level and we should not hand out trophies for half measures that kick the climate change can down the road. We need to play the full nine innings because climate change does not care about mercy rules, nor respect the waving of white flags. It is my hope that leading up to and following the 2015 COP in Paris our leaders emerge with something more than c'est la vie. Our planet and lives (human, plant and animal) are hanging in the balance and we need to do much, much more to untie the knot of climate catastrophe. So while I would not refer to the efforts in Lima as a complete failure, I am certainly not lighting up cigars nor busting out the bubbly; I am still very much biting my fingernails.