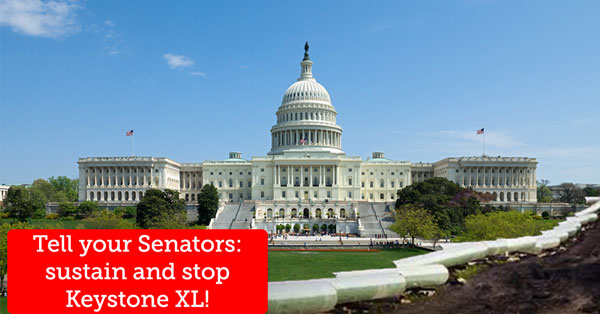 President Obama has promised to veto the Keystone Pipeline bill if the Senate passes it this week. But that may not stop the new pipeline-pals running Congress.

Right now, the Senate bill has 60 co-sponsors; that means they need just six more Senators to override the President's veto. When it comes to stopping this climate-killing pipeline, we can't afford to take any chances. That's why I am asking you to please tell your Senators to sustain the veto now, even before the bill is passed.

President Obama has finally come to his senses and described the Keystone XL Pipeline for what it really is: A climate killing project that would in no way benefit the American people. But Keystone backers are already accusing the President of vetoing a project that would "create thousands of jobs" and "secure America's energy independence." We've already seen that some Senators are susceptible to those misleading arguments, and can be convinced to support the pipeline despite the facts.

The facts are that Keystone would only create 35 permanent jobs and have negligible impacts on U.S. energy security. Our country would just be used to transport the dirtiest oil on earth out of North America to be sold to the rest of the world; hardly a contribution to U.S. energy security. In short, the Republican claims this project would benefit the U.S. are nothing more than a pipe dream. And in exchange, we'd be lighting the fuse on a carbon bomb that experts have called "game over" for the climate.

Click here to tell your Senators to clog the Keystone Pipeline once and for all.

We knew that the new Congress was going to be one of the most anti-environment legislative bodies in history. Barely into the new year, they are wasting no time to prove us right. But we have a chance to strike a serious blow to the climate killing friends of Big Oil. With your help we can clog the Keystone XL Pipeline for good.

Sun Tzu once said, "Convince your enemy he will gain very little by attacking you; this will only diminish his enthusiasm." Please help us win this fight by telling your Senators to sustain the veto, and maybe the other side will think twice before proposing another piece of legislation that threatens our climate, environment and health.