Thanks to the amazing investigative reporting of InsideClimate News (ICN) and the Los Angeles Times, we learned that Exxon has known about the real dangers of climate change for nearly 40 years. Furthermore, Exxon knew that it would be necessary to leave a significant portion of fossil fuels in the ground to avert the worst impacts of a rapidly warming planet. But rather than speak out and risk their profits, they chose to keep this from the public.

Based on these revelations, New York Attorney General Eric Schneiderman recently opened an investigation into Exxon under the state’s aggressive Martin Act. Yesterday with your help we ramped up the pressure for the Department of Justice (DOJ) and attorneys general of other states to follow Schneiderman’s lead so that we can get to the bottom of Exxon’s depravity and bring them to justice. 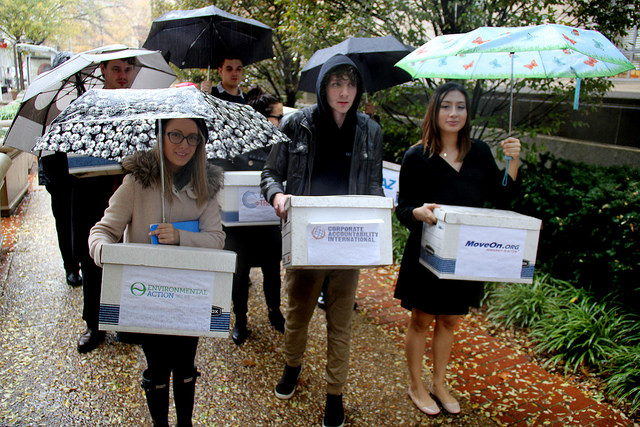 Sally From Environmental Action on the way to DOJ with 50,000 of your signatures

Yesterday we joined a coalition of organizations including Climate Hawks Vote, ClimateTruth.Org, Food and Water Watch, Sierra Club, 350.org and others to deliver 360,000 signatures (including over 50,000 of yours) calling on DOJ to investigate Exxon’s climate deception.

Prior to the delivery I took part in a press call with members of the coalition and we we’re joined by 350.org co-founder Bill McKibben as well as Representative Ted Lieu (D-CA) to discuss why it’s imperative for DOJ launch an investigation.

Bill McKibben mentioned that the petition delivery came at an opportune time given the fact that October was the hottest month ever recorded in human history. He went on to say, “Exxon’s climate deception is one of the most serious corporate scandals in U.S. History.”

Representative Lieu, for his part, praised the reporting of ICN and the LA Times and believes there is enough information to warrant a DOJ investigation. He specifically referenced securities law stating, “misleading or omitting facts is a violation of these laws.” Lieu also told us about a meeting he attended with other lawmakers where Exxon executives proclaimed their belief in climate change and support for a carbon tax. But given that Exxon was at the same time funding climate denying think tanks like the Heritage Foundation, Lieu said, “Telling lawmakers they believe in climate change is not enough. They need to announce this to the public and I call on Exxon to launch a massive public relations campaign to tell the public the same thing they told my colleagues and I.” Lieu is one of many lawmakers, including Senators Sheldon Whitehouse (D-RI) and Bernie Sanders (I-VT), who sent a letter urging DOJ to investigate Exxon. Representative Leiu also announced that he will soon submit a letter with fellow lawmakers to Big Oil executives asking what they knew about climate change given the revelations of Exxon. 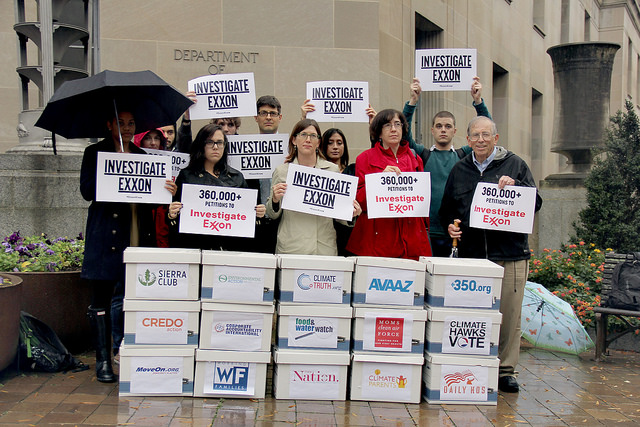 Despite rain and grey skies this was a bright day: 17 organizations representing millions of concerned climate activists made their voices heard and demanded that our president’s top cop, Loretta Lynch, deliver justice to Exxon on behalf of the American people and citizens everywhere. I am so proud to represent the members of this organization who sounded off resoundingly.

And this is only the beginning! If #ExxonKnew then we need to find out what, and when other Big Oil corporations knew about climate change as well. And with AG Schneiderman’s investigation, coupled with Representative Lieu’s letter, it’s safe to say we are going to find out a lot more troubling revelations that will thrust us into even more direct action.

Stay tuned for more actions and events you can participate in as we fight to bring justice to Big Oil climate deniers.

PS – You can support our work to hold Exxon and Big Oil companies accountable by making a donation here.