No matter how you feel about the agreement reached at the COP21 Global Climate Summit, one thing was made clear in Paris and worldwide: The People Of Earth Are Ready For A Fossil Free Future.

But Big Oil has been fighting back. And last month they won a victory when Congress voted to lift the crude oil export ban last month. The worst thing about the vote to is that it puts dozens more towns and communities in the path of dangerous bomb train shipments of crude oil by rail. Now that Big Oil companies can sell more-explosive Bakken and Tar Sands crude anywhere in the world, they’re rushing hundreds of new shipments of this dirty stuff towards our coasts every day. That’s why we needed 2016 to commence with renewed energy and a revolutionary fervor to reject fossil fuels and resist climate change. I saw just that, first hand yesterday in Vancouver, WA, at one of the best anti-oil rallies I have ever attended.

Tesero Corporation and Savage Companies (Tesero-Savage) have applied to build the largest oil train facility in the country just along the Columbia River. The facility would handle 360,000 barrels of oil per day (over 15 million gallons) and require, at minimum, four one mile-and-a-half long trains each day — that’s over six billion gallons of oil per year traveling in 43,000 train cars. Tesero-Savage recently completed an Environmental Impact Statement (EIS) for the proposed facility, which is currently under review by the State of Washington’s Energy Facility Site Evaluation Committee (EFSEC) who will eventually recommend Governor Jay Inslee to approve or reject the project. 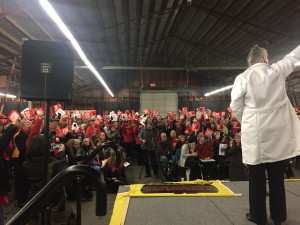 EFSEC held a public hearing yesterday, and if the people who attended are any indication of the type of activism to expect in 2016, it’s gonna be a very good year. Halfway through the hearing I got to take part in a rally organized by a coalition of friends from great organizations like Climate Solutions, Friends of Colombia Gorge, Forest Ethics and Washington Conservation Voters. But the real leaders of this coalition are representatives of First Citizens like the Confederated Tribes of the Umatilla Indian Reservation (Umatilla). 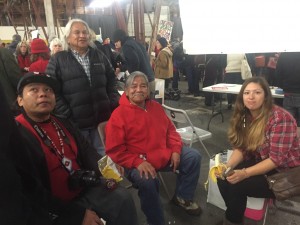 was even such things as the states of Washington or Oregon. They are fighting this facility because it threatens their livelihoods, their lives, their cultures and their legacies. They made this clear during the rally and during their testimony to EFSEC. And there is a very good reason that the nearly 1,000 people who attended the hearing (all dressed in red) and rally are skeptical of permitting bomb trains right next to a river – history suggests there would almost certainly be a catastrophic spill. Between 2010 and 2014, our nation experienced nearly 400 train derailments that spilled over one million gallons of crude oil into our communities and waterways.

Communities affected by massive oil spills never fully recover. Three years after 800,000 gallons of Canadian crude tar sand oil was spilled into the Kalmazoo river, residents still complain of adverse health and economic impacts. And tar balls are still washing up on shores, sea life is still turning up dead and businesses have still not recovered five years after the Deepwater Horizon blowout and oil spill in the Gulf of Mexico. If even a small amount of the more than 15 million gallons of crude oil that Tesero-Savage proposes to handle daily was spilled into the Columbia River or surrounding areas, the damage could be irreparable. This was our collective message to EFSEC, to Gov. Inslee and to Tesero-Savage: The risks to our climate, communities and waterways are just too great.

If you agree, then please sign on here to make 2016 the year we ban bomb trains and keep extreme oil in the ground for good! 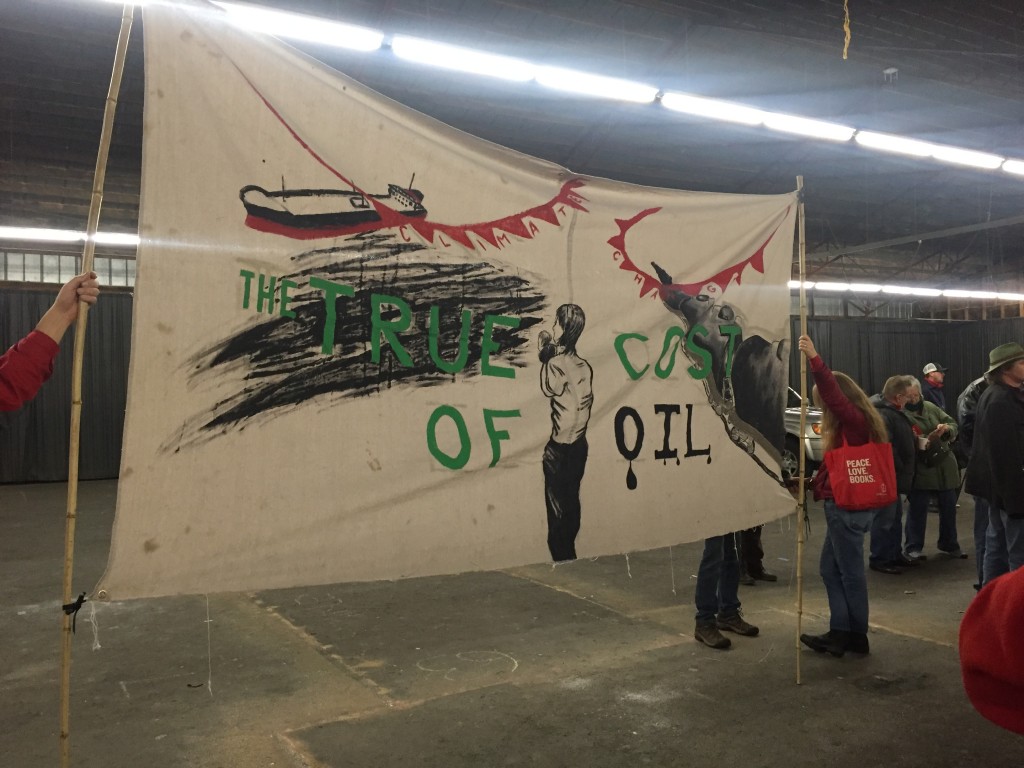 I think it’s safe to say that the coalition who are standing in the way of this ill-conceived petroleum pitfall are going to do whatever is necessary to ensure this facility never sees the light of day. Thanks to the over 15,000 of us who took action with them by sending a comment on the EIS, they’ve got a real chance to win. We will be keeping a close watch on this issue, and will be sure to keep you informed as events develop. In the meantime to stay in touch, you can sign on here to make 2016 the year we ban bomb trains and keep extreme oil in the ground for good!