Last week was a watershed moment in the fight to stop offshore drilling and convince President Obama’s team to keep fossil fuels in the ground.

It started, as it always does, with concerned activists and members like YOU – who signed on to petitions telling the President’s Bureau of Ocean Energy Management (BOEM) to scrap all new offshore oil drilling in their five year plan. BOEM had originally proposed a ton of new offshore drilling sites, including new leases in the Arctic and Gulf of Mexico, as well as opening areas off the Atlantic coast to drilling for the first time in decades.

Fortunately, you put a stop to (some) of that – responding to over 500,000 comments opposed to Atlantic drilling, BOEM quickly dropped those lease sites from the plan.

But BOEM’s revised plan still left a lot of water open for offshore drilling – especially in the Gulf of Mexico, where 10 of the 13 new drilling sites are proposed. That’s important because rumors have begun to circulate that President Obama may nix the three Arctic drilling sales under increasing pressure from leading members of Congress, scientists and others. But that still leaves way too much water vulnerable in the Gulf — and would result in way too much global warming pollution for our climate to bear.

This region has been used as a pollution sacrifice zone for decades. From Keystone XL’s southern leg to new oil and gas export facilities, too often the Gulf of Mexico gets the drilling, spilling and pollution of the oil and gas industry. To add insult to injury, companies like BP, Exxon and Shell can often lease public lands like the ones BOEM is proposing to auction in this plan for as little as $2 an acre. And local communities including the United Houma Nation and Biloxi-Chitimacha-Choctaw are on the verge of paying the ultimate price for decades of oil drilling and neglect: their land, their homes and their way of life.

Emboldened by our success on the Atlantic drilling leases, we came together with frontline communities in the Arctic and the Gulf to organize a massive #KeepItInTheGround petition campaign. Along with allies like Friends of the Earth, 350.org, the Sierra club and many others we succeeded in gathering more than 1 MILLION comments to BOEM opposing offshore drilling. 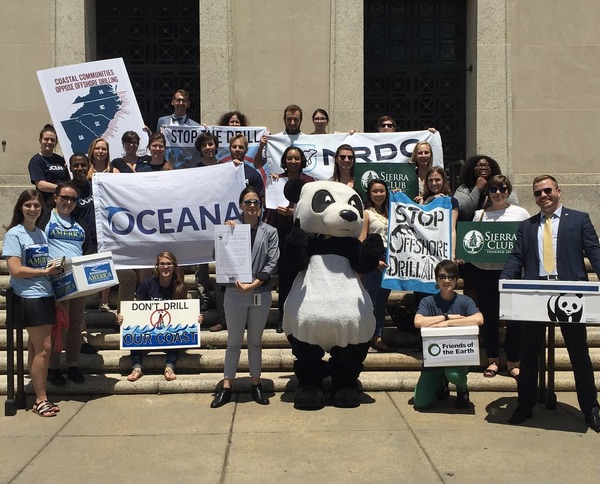 With your help, we organized a massive thunderclap action that was seen and heard by nearly half-a-million people on social media Thursday afternoon. We also dropped off all the letters and signatures at the U.S. Department of Interior, along with our friends Oceana, World Wildlife Fund and Environment America. And our friends gathered statements from frontline leaders in the Arctic, the Gulf and everywhere our oceans and climate are threatened by offshore drilling.

You can read more quotes and statements from frontline community leaders below, and if you can, please consider chipping in and help us plan a series of events, protests and — if necessary — direct action events to shut down the fossil fuel infrastructure and offshore drilling. Click here to chip in.

Thanks again to all who signed, donated and took action. Here’s more from our friends on the frontlines of offshore drilling, courtesy of the media response team at Friends of the Earth.

“President Barack Obama did not build the altar to which our children are now sacrificed. He did not create the fire that sickens our communities, corrupts our liberties, and denies us the basic authority of self-determination, of the human right to clean water and air, of just economy – no, he did not create it. Yet the remedy falls to him, as to whether the fuel will be provided to maintain these injustices. As mothers, as citizens, as humans, we call upon him now: Remove our chains, Mr. President. End the torment that this destructive industry uses to sear the bones of our future. It is time to break-free. End the leases, invest in our liberation and allow your legacy to ascend the ashes.”

“I am a subsistence hunter from Point Hope and have been my whole life. I teach the younger generations that the ocean is our garden and we must respect what it provides for us. I am very concerned about how our whales and walrus and seals will react to oil and gas exploration and development in the Arctic Ocean, in our garden. I fear that if we allow development activities to take place, our animals will be harmed and our future generations will not be able to subsist off of the land. There should be no further lease sales in the Arctic Ocean to protect our garden and our way of life.”

“I oppose the federal government’s 5 year plan for new offshore oil and gas leasing. As written, the plan continues to use the Gulf of Mexico as a human and environmental sacrifice zone, exacerbating social inequity and imperiling the future of the region’s rich cultures and traditions.”

“My home, the island of Shishmaref, Alaska is losing 3-4 meters of land each year from climate change caused by the burning of fossil fuels. At this rate, we will see the island erode completely in 25-30 years if there is no help. I hope that President Obama and other world leaders will hear my message and rise to the challenge to change how we use energy as a nation, because it is not just a political issue to me. It’s my future.”

“We live in one of the most beautiful, culturally rich, historically significant, and ecologically unique regions of not only this country, but the entire world. We are committed to defending the communities, protecting the cultures and restoring the ecosystems of our region. President Obama has a historic opportunity to stand alongside us to ensure the incredible Gulf of Mexico continues to provide life and livelihoods in our coastal communities for generations to come.”

“As both a proud Atlantic beach community resident and as someone personally connected to the tragic loss of life in the Deepwater Horizon catastrophe, I am proud to speak out alongside friends from the Arctic and Gulf regions to tell the Obama administration to Keep It In the Ground. The simple fact is that if offshore drilling wasn’t right for the health, safety and economic development of the Atlantic coast; it’s not right for the Gulf and Arctic either.”

“I’m Yupik and the Inupiaq culture and traditions in Barrow are similar to the Yupik culture and traditions, as we share the same oceans, seas and natural resources. The sea mammals, fish and birds migrate along the pathways running up north and back south through our great country of Alaska. We all talk to each other about the movement of the animals. Alaska cultures and traditions evolve and sustain themselves with the natural resources all from the air, waters and lands of Alaska. These traditions need healthy environments to sustain healthy people. Oil and gas development in the Arctic Ocean threatens these traditions for coastal residents throughout the state of Alaska.”

“When the oil tides rolled in, back in 2010, coastal communities across the Gulf witnessed the devastating gambles taken to harvest fossil fuels off our shores and in our waters. We are on the front lines, witnessing the side effects of extreme extraction, ranging from rising sea levels to tainted waters to more violent and unpredictable weather. That’s why we are calling on President Obama to refuse any new leases in his offshore drilling plan and protect the Alaskan Arctic and Gulf South waters, wildlife and ways of life. It is time we break free from fossil fuels and build the just transition to renewable and sustainable solutions.”

“I am Iñupiat, my name is Robert Thompson. I live in Kaktovik, Alaska. I am opposed to opening the offshore area of the Arctic to leasing for oil exploitation. There is no ability to clean up oil spills in the Arctic. I have asked if oil can be cleaned up from beneath the ice, in the dark, in blizzards in -40 degree weather; no one has answered in the affirmative. The people of California, Florida, and people on the East Coast are opposed to oil drilling where they live; their areas have been removed from consideration for drilling. l ask that we, the Iñupiat, who live in the proposed leasing area, be given the same consideration.”