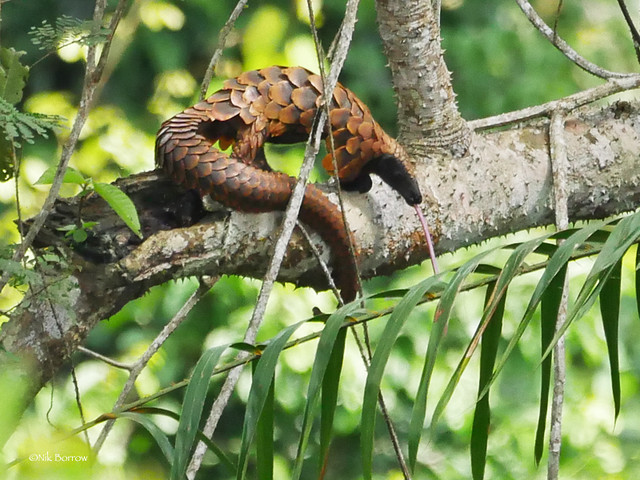 There’s something very American, even very back-to-nature, about cowboy boots.

Sure, cowboys helped destroy much of the Plains’ ecosystem, and even today, some of them oppose restoring grasslands for the bison who once roamed them.

But one of the most enduring images of America — admired worldwide — is of a lonesome cowboy under a big sky, with his boots strapped close to his faithful horse.

It’s a way of life, a connection to raw Nature, that many try to evoke today by wearing cowboy boots in settings far from the range. And when those boots are made from the skins of rattlesnakes, cobras and sharks, well, there’s nothing wrong with telling the world “I like to live dangerously”.

But what’s the message being sent by those whose boots are crafted from the hides of endangered species or animals headed in that direction?

In particular, what’s up with wearing pangolins and arapaimas?

Pangolins are those weird-looking crosses between an armadillo and an anteater — the world’s only mammal with scales for skin. They’re also one of the world’s most hunted and poached mammals, with as many as 2 million killed each year. Their hides have been used for amulets and traditional Chinese medicine. And until not too long ago, their distinctive diamond-shaped scales were used to make cowboy boots, belts and wallets in the U.S.

The good news for pangolins is that the U.S. banned imports of their skin in 2000 and, as of 2017, all international sales of pangolins have been banned. That hasn’t completely stopped the killing, but the bans have given pangolins a chance of surviving in the wild.

But, what’s good for the pangolin has been a disaster for a seemingly very different animal: the arapaima.

The arapaima — also known as a pirarucu — is an air-breathing fish that lives in the Amazon Basin of South America. Akin to a bass, it’s one of the world’s largest freshwater fish, growing as long as 9 feet.

Much to its misfortune, bootmakers have discovered that its scales look a lot like pangolins’. And for now, bootmakers have had few governmental restrictions in obtaining arapaimas, because the fish’s population hasn’t yet fallen enough to merit an “endangered” designation.

But they’re getting there fast. Scientists are warning that the accelerating shift from pangolins to arapaimas could quickly turn fatal.

Is that really necessary? I get the aesthetic appeal. But there are plenty of ways — usually a lot cheaper — to get that same look without someone killing an unsuspecting fish in far-off Brazil, shipping it by boat, train and aeroplane to the U.S., and then doing all the work needed to turn it into a bright and shiny boot.

For that short-sightedness, the makers of pangolin and arapaima cowboy boots are the “winners” of the August 2019 Thneed Trophy.

This message is not associated with or endorsed by the creators or the publishers of “The Lorax”.