Yesterday I visited Richmond, Virginia, with a coalition of local activists representing citizens and property owners asking Governor Terry McAuliffe to withdraw his support for the proposed Atlantic Coast Pipeline (ACP) and other projects that eviscerate property rights and put communities at unnecessary risk. The ACP, which is being proposed by Dominion, LLC (the same fracked gas barons that brought us the Cove Point Liquefied Natural Gas [LNG] Export Facility in Maryland),  would transport fracked gas 554 miles through West Virginia, Virginia and North Carolina. And due to Section 56-49.01 of the Virginia Constitution, Dominion has the right to enter the land of property owners, without their permission, to survey the route of this perilous pipeline. 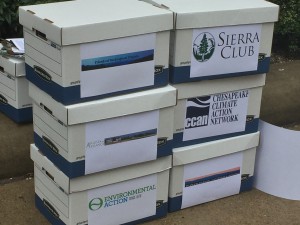 Following a brief press conference, our coalition, which included friends from Chesapeake Climate Action Network, the Sierra Club, Friends of Buckingham and the Augusta County Alliance, delivered a petition to the Governor with over 5,000 signatures, including yours — thank you so much to all of you who took action. The signatures definitely got the attention of the Governor’s Public Liaison who was later described by McAuliffe staff as, “overwhelmed” by the public reaction.

Our coalition was then invited to a meeting with Evan Feinman, the Governor’s Deputy Secretary of Natural Resources. Mr. Feinman listened attentively to all of our concerns, which ranged from outrage over the governor’s public statements in support of the ACP, to recent financial/market reports that indicate LNG facilities and pipelines will become obsolete in the near future, to concerns over the dangers to endangered species unique to Virginia. We all expressed deep concern about the lack of transparency and public participation offered by Dominion thus far.

I pressed Mr. Feinman on concerns regarding Virginia property rights and asked what could be done about Section 56-49.01 of the State 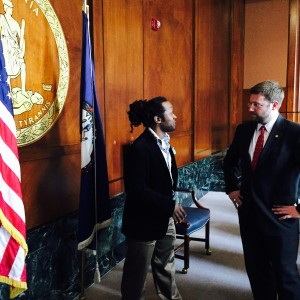 Constitution. While he seemed to agree that private property owners should not have to sacrifice their privacy so that Dominion can maximize their profits, he also conceded that due to the conservative make-up of the Virginia State Assembly, very little can be accomplished. He also painted the governor’s support for the ACP as general support for any project that would bring investment and jobs to Virginia. But that’s a weak argument, considering the project would only create 36 permanent jobs.

For his part, Mr. Feinman did agree that the governor would be troubled with any reports that the process for the ACP lacked transparency and public input. He committed to researching this issue more and promised to get back to us. Feinman also claimed that there was little that the governor could do to stop pipeline projects. He suggested that our coalition keep pressure on Dominion and the Federal Energy Regulatory Commission (FERC) to release more environmental reporting to the public.

We’re certainly happy to keep the pressure on Dominion and FERC, as Mr. Feinman wished. But we also need to keep pressing governor McAuliffe to protect property rights and the environment from the perils of fracked gas.

This is especially true because, literally right after our meeting the governor released a statement indicating that he supports the ACP, and claiming that it will lower energy costs and create jobs. He must have missed our message that this project has more to do with increasing Dominion’s profits than lowering energy costs; and that the small number of permanent jobs created is too little for the high cost of climate catastrophe.

Clearly we have a lot more work to do, and we will do it. Our next step is to help mobilize citizens in Buckingham County, Virginia, and along with our coalition, keep fighting until this project is stopped. Stay tuned for more information on how you can help to keep the pressure on McAuliffe, Dominion and FERC, which will be coming to you soon.