Yesterday the Florida Fish and Wildlife Commission held the second of their annual public meetings in Jupiter, Florida, just north of Fort Lauderdale. The primary reason FWC held the meeting was to discuss rules associated with aquatic life and fishing rules — but wildlife activists had something else in mind and flocked to the meeting to address rumors that the FWC will permit another Florida Black Bear hunt.

These rumors are coming closer to reality, as it was reported that FWC is indeed considering another black bear hunt. FWC didn’t mention the hunt once during the meeting yesterday, which included a mini-rally and protest outside. 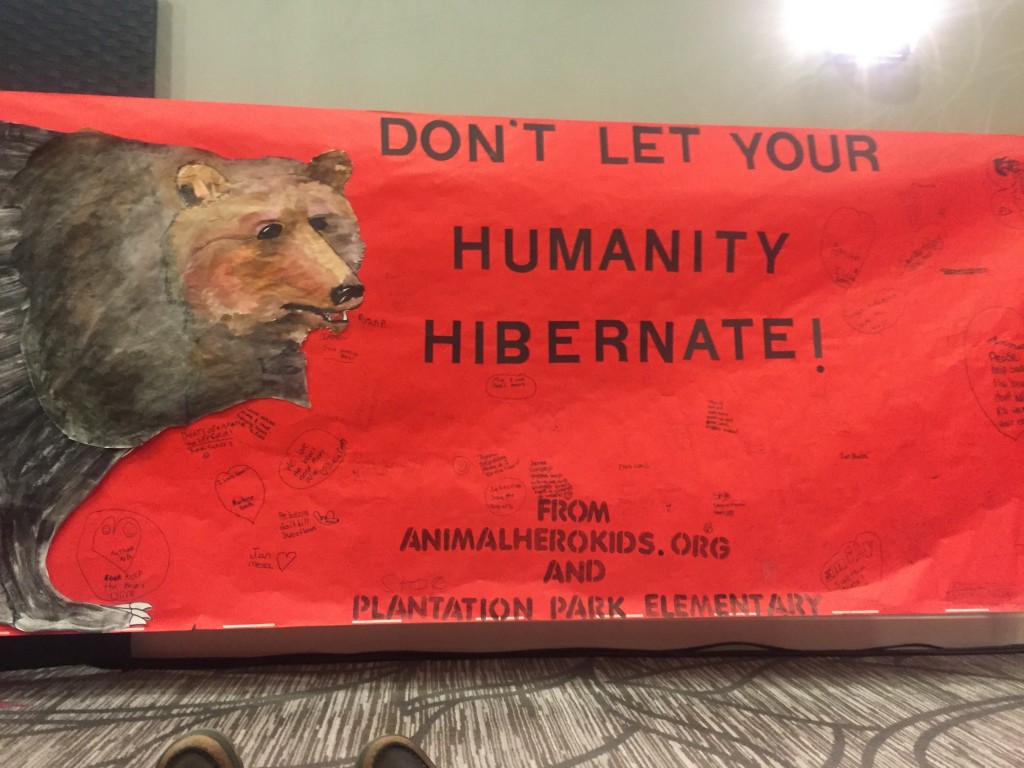 FWC is basing their decision to sanction another hunt on their recent Black Bear population assessment,  released earlier this month. This is the first statewide population assessment in nearly 14 years — and as I pointed out in my testimony, it was nothing worth waiting for.

For starters, the entire report is less than 5 pages, including the “Literature Cited” section. As I told the FWC Commissioners, I wrote a longer report on the Lorax in the 3rd Grade. Additionally, the report includes what we have come to expect from FWC: selective and shoddy science used to reveal the results they want, rather than the facts about our endangered non-human neighbors. This was demonstrated in the report, which indicates FWC used ESTIMATED instead of REALIZED results because estimated results were more appropriate for their conclusions.

During my testimony I also called for the most if not all of the commissioners step down from their positions as it’s clear they have failed the people of Florida by not adhering to FL State Constitution Amendment 5, which created FWC. They have not even lived up to the part of their own proclamation that states, “the principles that conservation is a public-trust responsibility and that FWC, more than ever, will need and seek the active involvement of Floridians.” Last year’s hunt was opposed by 75% of Floridians, and as I told they commissioners they have lost the public trust.

But here is what I said that really stood out based on their reaction to my testimony. I let them know that one way or another, the people of Florida will not allow a hunt to occur this year, even if that means using a diversity of tactics. And I was not the only person who issued this warning as other activists at the meeting also put FWC on notice. We’re ready to use the courts, the media and even to risk our safety by standing between hunters and the bears if we have to.

Commissioner Ron Bergeron, one of only two commissioners to vote against last year’s hunt, stayed after the meeting to speak with activists. He himself agreed that a hunt this year is unwarranted and unnecessary. Chuck O’Neal from Speak up Wekiva let him and FWC know that the same Constitution that put them in power could also be used to take them out of power. 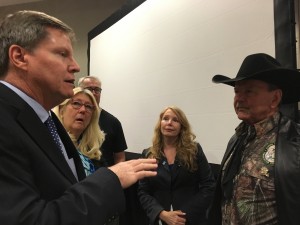 Chuck O’Neal from Speak up Wekiva speaking with Commissioner Bergeron

That said, it’s becoming clear that we must ramp up our efforts to get a hunting ban in as many Florida counties and cities as possible. If FWC is planning a hunt, then they will wait until the last minute to let us know. Now more than ever is the time to take our Black Bear Justice Florida Tour on the road before FWC signs another death warrant.

We must get the word out before the June FWC meeting, where they will make their final decision. If we can get enough cities and counties to ban Black Bear hunting, we can stop FWC in their tracks. Click here to donate to our Black Bear Justice tour, and stay tuned for more updates on how you can help us prevent this runaway commission from bringing the Florida Black Bear to the brink of extinction.

You can see my full testimony from yesterday by clicking on the image below.