A Tale of Two Debates: Climate Change Makes an Appearance

A Tale of Two Debates: Climate Change Makes an Appearance

It could be said of the last three Presidential debates (for both parties) that “It was the best of times, it was the worst of times.” The good news is that climate change made appearances at all three most recent debates — on both sides of the aisle. As I previously reported, the Flint debate included great questions on climate change, due largely to the efforts of our coalition and the nearly 100,000 signatures we delivered to the Democratic National Committee demanding they focus the debate on racial, environmental and climate justice.

This week I had the chance to attend the Democratic Debate in Miami, Florida. Miami and many other areas of Florida are in a state of emergency when it comes to climate change especially due to rising sea levels. Driving down the coast to Miami, I was shocked at how high water levels are. Many of the homes and infrastructure are just one climate event away from being submerged, or inundated. I went to the debate with high hopes for a climate discussion, as there is just no way anyone with functioning eyes can deny Florida climate situation.

The Miami debate was held at Miami Dade College, our country’s largest institution of higher learning with over 160,000 total students. The energy in the room was intoxicating and I was particularly interested in the history that was being made as Univision hosted the first Presidential debate simulcast in Spanish and English. 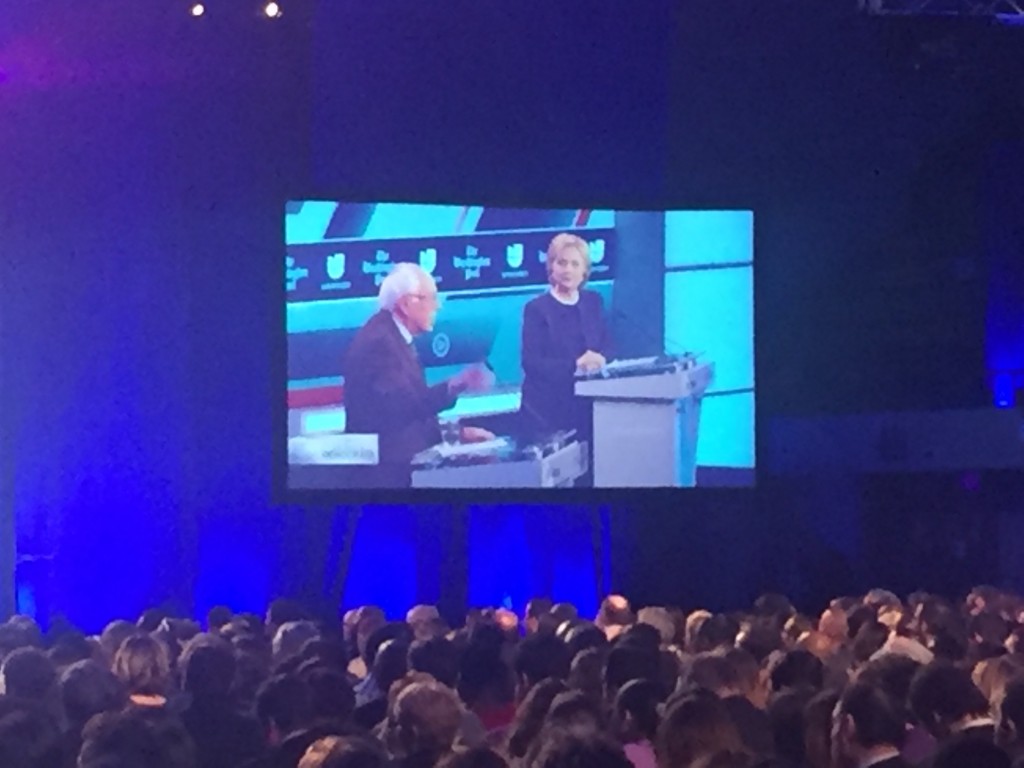 Senator Sanders and Secretary Clinton wasted no time bringing climate change front and center in their opening remarks. Throughout the debate, it seemed that when either candidate attempted to discuss climate, the moderators shepherded the conversation to another topic. But then everything changed with one question: the question I and many other climate activists were waiting for — it was right to the point and even called out climate deniers.

I could write a book about the answers from the two candidates, but it would be best to watch video on the issue below and see for yourself their proposed positions on fossil fuels, a carbon tax and their overall climate change platforms. Check out the clip below, or click here for a full re-play of the debate including our panel’s live Q&A.

Hillary Clinton and Bernie Sanders stress the threat of climate change — and accuse each other of not being strong enough on the issue. http://cnn.it/21ZTpIt

The very next day the Republicans had their debate on an alternate campus of the same school. Jake Tapper deserves kudos for asking a direct question about climate change and even referenced the urgency expressed by Republican mayors in Florida. That question was posed largely thanks to the amazing work by our friends at ClimateTruth.org. Mr. Tapper who previously moderated a debate that failed to deliver real discussion on climate change (prompting us to call him “Jake the Flake”) has come a long way, and his question was instrumental in ensuring that climate change was discussed in three consecutive debates.

That said, it was very disappointing to see Senator, and Florida native son, Marco Rubio’s answer. Rubio tried to play a game I like to call Hyper-literal Parlance — claiming that the climate is always changing, which is true, but failing to show or admit that human activities like burning fossil fuels are disrupting our climate, with dangerous consequences — even though some of those consequences are happening right in his back yard. Rubio also demonstrated abject climate ignorance when he said “anything the USA does is pointless since China and India are doing nothing.” Sen. Rubio should read the article I wrote earlier describing the many ways China is actually leading on global climate change. Besides, what happened to those bold proclamations of Global American Leadership? Are we to believe America, the envy of every nation and the inspiration of Rubio’s grandfather, has no ability or reason to inspire a global energy transformation? Stick to your story, Senator.

Governor Kasich offered a more nuanced answer, but still demonstrated a lack of the determination and courage necessary to act on climate. His remarks indicate that there is a competition between the economy and our environment. But let’s give him credit that at least he did not flat out deny climate change. Check out the clip below to see responses from Rubio and Kasich to Mr. Tapper’s question on climate change.

GOP Debates Climate ChangeFinally! A GOP debate gets a strong question on climate change. Thanks to Miami Mayor Tomás Pedro Regalado for challenging his own party’s candidates.

Posted by ClimateTruth.org on Thursday, March 10, 2016

You can watch a recap of the Florida #GOPDebate by clicking here. Please also be sure to tweet our old friend Jake Tapper and thank him for #AskingonClimate.