A New Lease on Life for the Gulf

A New Lease on Life for the Gulf

Yesterday was a turning point in our movement to keep fossil fuels in the ground. For the first time ever, we shut down a BOEM event related to the auction of fossil fuels on public lands – in this case under the Gulf of Mexico – and sent a powerful message to the Obama administration and Big Oil companies everywhere that to stop global warming we need to keep fossil fuels in the ground and finance a just transition to 100 percent renewable energy by 2050 (or sooner).

Check out the whole video below, and scroll down for a written report.

On March 23, 2016, the U.S. Department of Interior had planned to auction off 43 million acres of the Gulf of Mexico of oil and gas drilling. This one event had the potential to unleash the 8th-largest source of carbon pollution on the planet. That action would be the exact opposite of what scientists and experts tell us we need to do: Namely keep at least 80 percent of proven fossil fuel reserves in the ground and finance a just transition to 100 percent clean energy by no later than 2050.

But if you wanna #KeepItInTheGround, you gotta get up early in New Orleans. So our day started before 7 a.m., setting up in a park a few blocks from the Superdome and laying out the amazing banners you can see in the video. Organizers had stayed up all night painting and planning the artwork for this event, so that we looked great and told a powerful message on TV and in photos online.

Our message was simple: STOP the lease of fossil fuel reserves in the Gulf and everywhere, and invest instead in a just transition to a 100 percent clean energy future for all. As our friend Cheri Foytlin pointed out, if jobs and economic development are what the Gulf region needs, we would do better to start by hiring 1,000 workers to repair the 27,000 aging and abandoned oil wells in the region – rather than poking new holes int the ground to dig up more fossil fuels.

A lot of the artwork and speeches also focused on acknowledging the particular burden climate chaos places on the Gulf region. Our event at the Superdome was in solidarity with other communities and regions also struggling against the destructive effects from drilling, fracking, climate chaos and all the perils of extreme energy extraction. Dozens of Environmental Action members pitched in help pay for the art supplies, and to rent buses and vans to bring supporters from Mississippi, Alabama and Florida. (PS – We’re still a few dollars short of our fundraising goal if you’re inspired by the action and want to chip in a few bucks, it’s not too late!)

After everyone had assembled we heard some inspiring opening words from New Orleans natives and Gulf region frontline communities including the Houma Nation. Our members will remember the Houma – a local tribe not recognized by the Department of Interior who we’re still supporting in their fight to get justice from the BP spill and Hurricane Katrina.

Then it was a short march to the Superdome with a police escort. It was impossible to miss our huge crowd coming down the street as we snarled traffic and shouted our demands to Keep Fossil Fuels in the ground.

When we arrived, we had expected security to turn most of our crowd away (after all, there were hundreds of us, dozens of cameras and microphones, huge banners etc.) but instead the Superdome security was very accommodating. They asked us to leave our biggest banners and props outside (they would barely have fit through the door) and checked most of us for weapons,  then they let nearly everyone in.

That was a big deal because by the time we went upstairs, there were a LOT of us – way more than there were BOEM staff or oil industry employees. When we all gathered at the front near the stage we blocked off the auction block and shouted down the PA system in the ballroom.

That’s how it went for over an hour – there were a few scuffles where police and Superdome security tried to remove some of our leaders (including Cheri) from the stage, but nobody was arrested. Police and security made no attempt to disperse our huge crowd as we sang, chanted, waved signs and generally made a pandemonium of the proceedings. At various points we were joined by tribal leaders, and even retired General Honoré, who was considered the “savior of New Orleans” by many locals after he cleaned up a disastrously botched federal response to Hurricane Katrina. As he says in this op-ed in the Hill, “I am with them at the Superdome, to ensure climate survivors will never have to go there again.”

After 90 minutes, BOEM simply gave up. They canceled the rest of the proceedings and left the building quickly. We chased them out the door with chants of “I believe that we will win” and proceeded to have a celebration on the front steps of the Superdome including an aerial photo op: A helicopter circled the Superdome to get a photo of just how big, beautiful, diverse and awesome our whole event looked!

There are a  couple of reasons why this event was so awesome (other than the chance to see so many of our New Orleans friends and allies).

Yesterday was a huge success, but it’s only the beginning. This May, a massive round of actions and protests will send a message that we need to keep fossil fuels in the ground. And in August, we’ll be back in New Orleans to disrupt another auction – and as Cheri said, “We’re getting bigger, stronger, smarter every time. We’ll be back!” 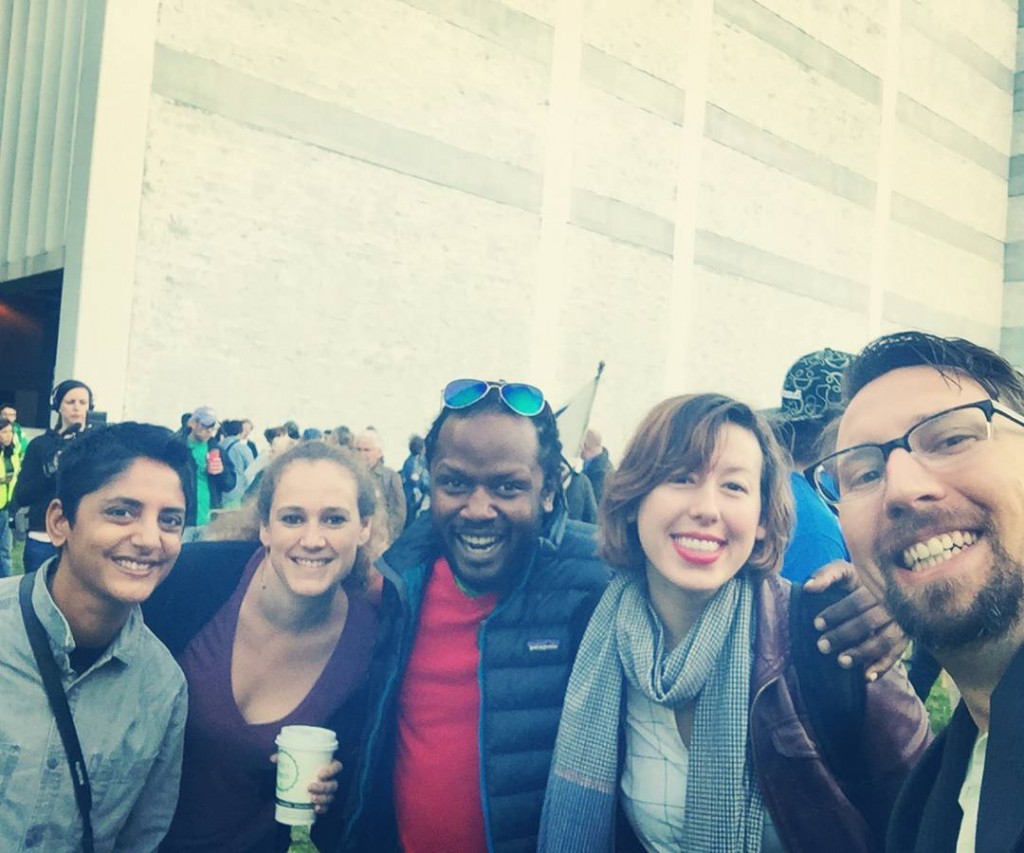