A Memorial for Climate Martyrs

A Memorial for Climate Martyrs

I must commence by ensuring the readers that I mean no disrespect whatsoever to the brave women and men who have given themselves in military service to the United States. Nor do I wish to diminish the beliefs of anyone who contends that military service-people who died, did so to protect the freedoms we enjoy in this country and other developed nations. That said, there are soldiers, globally, whom have been forgotten, who do not have a day that memorializes their service and their sacrifice. There is no day for these Climate Martyrs, whose lives were taken by the exacerbation of climate disruption, nor one for those who were/are poisoned, displaced or whose lives have been irreparably altered by climate change’s grand instigator: The Fossil Fuel Empire.

Photograph of what is believed to be the first Memorial Day in 1865.

According to a 2011 poll, a vast majority of U.S. Citizens do not know about the origins of Memorial Day. That is, many have no idea that the holiday was was started by former slaves on May, 1, 1865 in Charleston, South Carolina to pay homage to dead Union Soldiers buried in a mass grave at a Confederate prison camp. The newly freed men exhumed the Union bodies and worked and proceeded to give them a proper burial as gratitude for fighting for their freedom. The first Memorial Day included a parade of 10,000 people led by 2,800 Black children who marched, sang and celebrated military service.

That most U.S. Citizens don’t know this is ironic and just as troubling as the fact that most have no idea who suffer, as Dr. Robert Bullard put it, “First and Worst” from the effects of climate disruption. In Israel, on Yom Hazikaron (“Day of the Memory”), a state-run television station screens the names of EVERY soldier who has fallen in service, and we of course read the names of all the victims of 9/11 at “Ground Zero” in my hometown of New York City. But these amazing acts of solace and endearment also beg a serious question about those lost to the assaults of climate change: How can we honor and pay warranted homage to climate martyrs if we don’t even know who most of them are, what they look like and why the died?  The answer to these questions is where the irony protrudes through a surface of resistant ignorance, and it is none too delicious.

abroad since World War I were engendered by White leaders, the vast majority men, who represent/represent so called developed nations. There are numerous and continuous debates that center on the treatment of People of Color in the military as well as whether or not they have a higher burden of per capita casualties. But for one war in particular, the Vietnam War, the first U.S. war that mobilized fully integrated units, it is generally accepted that African-American soldiers faced a higher r chance of being positioned on the front-line, and consequently experienced a markedly higher casualty rate than their White counterparts. And throughout the history of this nation, Soldiers of Color, beginning with Crispus Attucks, paid the ultimate price for wars they did not start, and whose outcome would lead to little to improvement of their lives in the U.S. social concert.

Now take climate disruption, and the lucidity of the irony premised earlier should now start to become very apparent. Climate disruption, itself a system of oppression that forms the intersection of myriad forms of injustice including, but not limited to, racial, ethnic/indigenous, gender and economic, is a system, like war and the military complex, exacerbated mainly by wealthier, “White,” nations funded by profligate financial systems administered largely by White men. Poorer nations, including recognized and unrecognized Indigenous tribes, however, are paying a higher price for a system they can barely afford to be a part of, much more responsible for. And that price, includes a lower standard of living, a diminished quality of life, shortened lives and, more frequently than anytime in human history, acute death. 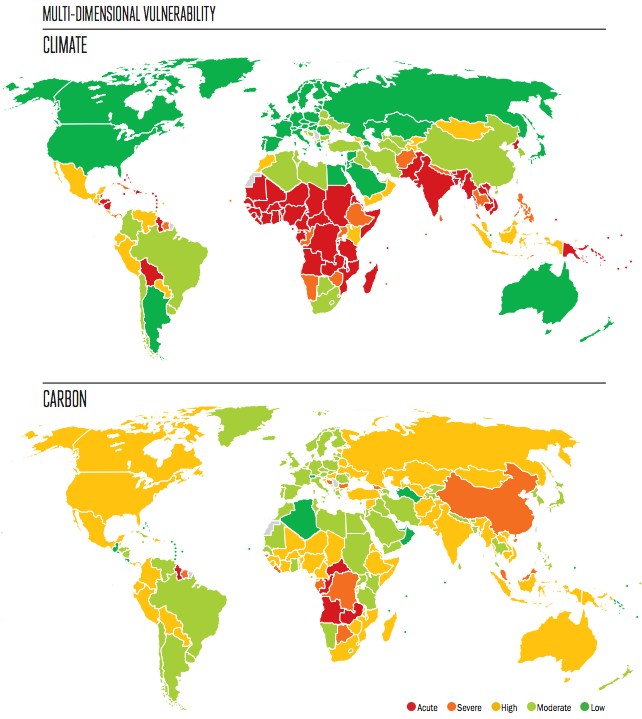 In 2012, DARA and the Climate Vulnerability Forum (CVF) released an exceptional work, the 2nd Edition of their, “Climate Vulnerability Monitor: A Guide to the Cold Calculus of a Hot Planet.” The report includes a Multi-Dimensional Vulnerability graphic depicting nations who are the highest emitters of carbon tend to have less vulnerable to climate impacts than lower emitting, poorer nations. And, while higher carbon emitting countries tend to have high vulnerability for carbon related impacts, such as health ailments, it’s the distribution of these impacts that need to be discussed. Because this is what is really missing from DARA and CVF’s work, a discussion on the distribution on impacts, especially in developed nations. Nonetheless, the report reveals that climate change is responsible for 400,000 deaths annually, with that number jumping to 4.5 million when accounting for deaths associated with a global carbon-intensive economy. That means that in two years, climate change alone accounts for more deaths than the Civil War, our nations bloodiest.

Many of us know about the disproportionate distribution of climate-related impacts, but too many of us do not. A chief reason for this is what I refer to as an Iniquitous Transmission of Urgency. Assuming climate is reported on in the first place, the story told still does not focus on the primary victims, those whose lives are altered by acute and chronic events, those hit “First and Worst.” There are not enough stories in the mainstream media and, in some cases, the mainstream environmental movement about the climate issues primarily affecting Black, Brown and low-wealth people locally, regionally, nationally and globally. There are too many people who have no idea about Cancer Alley, the Navajo water crisis in Arizona/New Mexico, potential Indigenous climate migrants in Southeast Louisiana or Kettleman City, and we all seem to be ignoring contemporary colonization in the form of Environmental Gentrification that has and will produce more and more Climate Martyrs.

But the Jersey shore, during and post Superstorm Sandy and Porter Ranch, CA received plenty of coverage, just sayin’.

This is one of the many reasons “Big Green” and the larger mainstream movement must work better to demonstrate solidarity with the racial/environmental justice movement. And this of course includes increasing awareness about the Indigenous social/environmental struggle, too often left out of the forefront of the EJ discussion and most times only receiving an “honorable mention.” A lack of solidarity is directly attributable to the iniquitous transmission of urgency associated with climate disruption; a lack of equal transmission will yield more Climate Martyrs, the majority of them Black, Brown and poor. Finally, a lack of solidarity and, therefore, equitable transmission, is like only celebrating Memorial Day for White Service-people, paying little or no homage to the many People of Color who died and continue to die for this country, founded on primordial racism, oppression and genocide, that continues to treat them as second-class citizens.

So to the Climate Martyrs, I leave you with these words:

You did not die in vain, you did not die by choice. Your demise was engineered by a system fueled by Hyper-Capitalism, that deemed your life expendable and your community a sacrifice zone. The immoral, unlawful and wanton termination of your life will be our flag, our cause, our calling that fills our purpose, our bone marrow and our blood. We salute you, we weep for you and we wish you Rest in Power knowing there are climate warriors worldwide who hear you from beyond guiding us to necessary and inevitable victory.

Blessings to the Climate Martyrs, gone, never forgotten and memorialized in our hearts EVERY day.