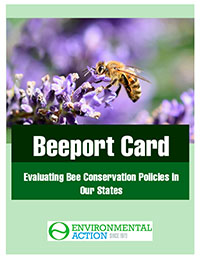 Bees are vital to ecological health and global food security. Hundreds of thousands of plants depend on bees for pollination, including key fruit and vegetable crops. But bee populations are collapsing, with alarming consequences for the future.

Research exploring the causes of colony collapse disorder has discovered various causes, including global warming, habitat loss, parasites and a class of bee-killing pesticides called neonicotinoids (or neonics). The threats of habitat fragmentation, degradation and loss and neonicotinoid use have been particularly well-documented and assessed by the ecological research community.

Unfortunately, so far, most states are failing to take measures that address the main threats facing bees. Our review of 50 states’ laws and regulations finds:

Explore the map below to discover your state’s grade! Click on any state to learn more about it.

One of the best ways your state can protect bees is by restricting the use of neonicotinoids (or neonics), a class of highly toxic pesticides. A growing body of research shows neonics are a leading cause of colony collapse. You can help get the most harmful uses of neonics banned in your state by contacting your governor today.

Maryland, Connecticut and Vermont have taken action and banned consumer sale of neonicotinoids, and several more are considering legislation. By raising your voice, you can help us build the necessary support to make your state the next to ban the most dangerous uses of neonicotinoids.