Wolves are being shot in Wyoming right now.

Wolves are being shot in Wyoming right now.

At least two dozen wolves have already been shot for trophies on Yellowstone’s doorstep this winter. Across the rest of Wyoming, dozens more are being killed with no quota to put limits on the slaughter.1 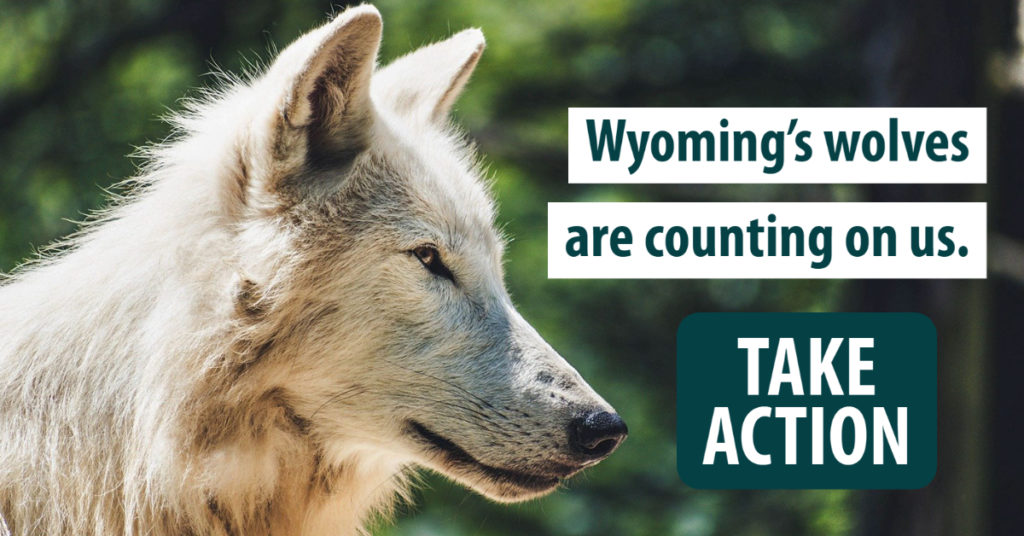 This brutal hunt needs to stop.

This brutal hunt needs to stop. We know that wolves are treasures, not trophies — and that if we don’t protect them today, they could face extinction tomorrow.

Now that nationwide protection for wolves has been lifted, it’s more important than ever for states to protect their wolf populations. Wyoming needs to do its part by putting an end to its annual wolf hunt.

That’s why we’re calling on Wyoming’s governor to make this year’s wolf hunt the state’s last.

Just three years ago, Wyoming set a statewide goal of slashing its wolf population in half — bringing it down to just 160.2 Every hunting season since has brought that reality closer.

The annual trophy hunt threatens wolves on the outskirts of Yellowstone and Bridger-Teton National Forest — habitats where wolves should be able to count on safety. And in 85 percent of the rest of Wyoming, a wolf can be shot and killed on sight for any reason: No permit needed, no questions asked.3

Wyoming’s track record on wolves is so terrible that a federal court has stepped in to stop the slaughter before. In 2012 and 2013, so many wolves were killed so fast that the federal government took control of the wolf population to save it.4

But in 2017, control of Wyoming’s wolves was returned to the state — and it immediately reauthorized unlimited wolf killing in most of the state.5

Add your name to save gray wolves.

We know that when we speak up for wolves together, we can win — and right now, wolves need our voices more than ever. Gray wolves have been officially removed from the endangered species list, so their fate is in the hands of the states they call home.

Wyoming’s current wolf management plan is simply unsustainable. That’s why we need to send thousands of messages to Wyoming’s governor, urging him to stop the slaughter of wolves in his state before they disappear.

Speak up for Wyoming’s wolves by adding your name today.