Idaho lawmakers want to make parts of the state into permanent “wolf-free zones” where an unlimited number of wolves can be killed — even when mothers are in dens with their pups.1 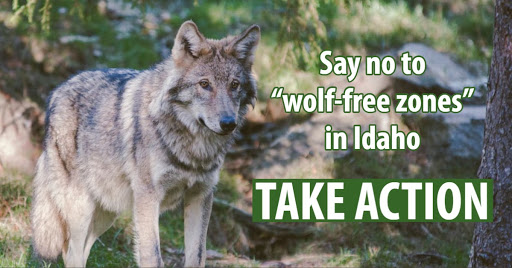 Wolves could be hunted to extinction.

Hunting once killed nearly every single wolf in the lower 48 states. If states like Idaho turn into wolf killing free-for-alls, we face the real possibility that our wolves will be hunted to extinction.

The Idaho Fish and Game Commission has already changed the rules governing the current hunting season, allowing wolf hunting year-round in certain areas for now.2 That’s bad — but this bill is even worse. It would make year-round hunting permanent.3

Worst of all, if this bill becomes law, Idaho won’t even be able to consider restoring protection to the wolf-free zones unless or until almost 90 percent of Idaho’s wolves are dead.4

We must build a future where wolves can thrive.

We believe in a future where wolves can thrive. We’re working toward a world in which wolves are safe to bring balance to the ecosystems they call home, and their haunting howls captivate generations of nature-lovers to come.

But that future is caught in the crosshairs of hunters’ rifles as states and the federal government both weigh how much protection wolves will get. Right now, wolves are facing more threats to their survival than ever.

Take action: Say no to wolf free zones in Idaho.

The U.S. Fish and Wildlife Service is deciding whether or not wolves will keep the protection of the federal Endangered Species Act (ESA). Wolves in Idaho are already missing ESA protection — so the wolf-free zone bill paints a sinister picture of what all our wolves may have in store if responsibility for their protection reverts to individual states nationwide.

We need to do everything we can to make sure wolves have the strongest protection possible in every state they call home. Now is our chance to convince Idaho’s governor to protect his state’s precious wildlife and say “no” to wolf-free zones.