Twice as many wolves slaughtered — unless we take action

Twice as many wolves slaughtered — unless we take action

Twice as many wolves slaughtered. That’s the goal the state of Wisconsin has set for a wolf hunt that starts in just a few short weeks.1 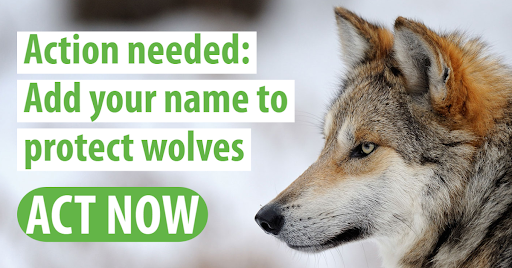 Wolves need the protection of the Endangered Species Act.

We urgently need to restore federal Endangered Species Act protections if we’re going to save wolves across the Lower 48 from a brutal hunting season.

You can take action to save the wolves by telling Interior Secretary Deb Haaland to restore protections for wolves.

As many as 1 in 3 wolves have already been killed in Wisconsin.

While the Fish & Wildlife Service has started a 12-month review to consider restoring protections in a handful of states, wolves can’t afford to wait, and their steps so far won’t protect all wolves in the Lower 48. Secretary Haaland has the power to move faster — and we need her to.

Wisconsin’s Natural Resources Board ignored its own scientists and disregarded overwhelming public opposition to expanded wolf hunting. This decision comes on the heels of a brutal hunt in February, when as many as 1 in 3 wolves were killed in just 60 hours, almost doubling the approved quota.2,3

And Wisconsin is just one of the states to dramatically increase wolf hunting this year. Montana set a quota of 450 wolves — nearly 40% of the state’s wolf population — to be killed in the state’s upcoming hunting season. And if hunters reach that quota, the commission could meet to increase it even further.4

Thanks to new laws passed this year, Montana and Idaho could kill up to 90% of their wolves, and in unbelievably brutal ways. From using ATVs and snowmobiles to run wolves down, to baiting wolves into traps where they could be left to struggle for days, more wolves will needlessly suffer and die this year than at any time in living memory.5,6