This Giving Tuesday, give wolves a fighting chance

This Giving Tuesday, give wolves a fighting chance 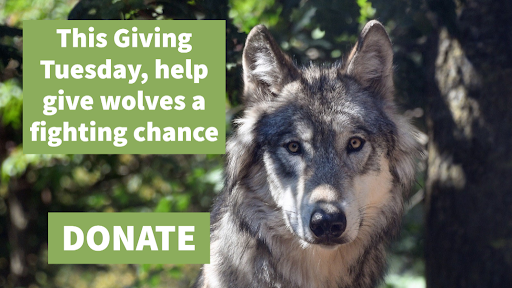 They were safe in the national park — but not in the surrounding states, where lawmakers have radically expanded hunting and trapping of wolves.

These wolves had no way of knowing they were crossing the invisible, man-made park boundary as they were lured across with bait that smelled like food, or by speakers playing the sounds of fellow wolves howling in the snowy woods.1

The killing of so many wolves was heartbreaking — but they also represent just a fraction of the hundreds of wolves killed across the Northern Rockies over the last two years. And now these same states have kicked off another brutal hunting season.

Donate today to help save the wolves.

Wolves are incredible animals, but they can’t defend themselves from high-powered rifles, or when states allow hunters to burn them alive in their dens or run them down with snowmobiles.2

That’s where we come in.

We won’t rest until wolves across America are safe and thriving. But we’re up against intense opposition, and we can’t do this without your help — all of our campaigns are fueled by grassroots supporters like you.