Tell the EPA: It’s time to crack down on methane

Tell the EPA: It’s time to crack down on methane

It’s up to 28 times more potent a greenhouse gas than carbon dioxide — and you can help make sure we emit a lot less of it.1 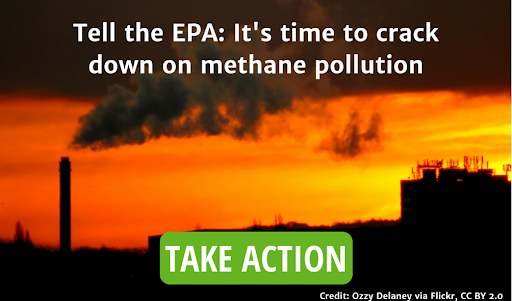 Methane gas is one of the biggest factors behind our warming climate — fueling the climate crisis that’s threatening endangered species across the planet and driving violent wildfires, worsening droughts and melting sea ice.

It’s time to tell the EPA to institute the strongest rules possible to cut down on this dangerous greenhouse gas.

Our planet is changing thanks to global warming.

Our planet is changing thanks to global warming — in more ways than most think about.

We’ve seen wildfires in the West darken the skies of cities across the eastern seaboard. We’ve seen increasingly powerful storms raging across the country, flooding places from Louisiana to New York City. And we’ve seen glaciers melt from Africa to Greenland — dumping more water into the oceans that will ultimately make floods worse and more common.

But there are other costs of climate change that we won’t see for many, many years.

A changing climate will leave no ecosystem across the planet untouched. As temperatures rise and weather patterns change, the ecosystems we’ve come to know on our planet will change too — closed canopy forests could widen out into open woodlands, for example, or grasslands could shrivel into deserts.2

These are the crises we’re living with and the changes that are coming — and they’ll only get worse unless we take action now. That’s why the EPA’s recently announced methane rules are so important.

Take action to protect the climate from methane pollution.

As far as human-emitted planet warmers go, methane is a much more potent greenhouse gas than carbon dioxide — but it doesn’t stay in the atmosphere for nearly as long. For that reason, the EPA says that cutting methane emissions now will have a strong, rapid impact on our warming climate.3

These new regulations on methane would seek to capture methane emissions from the oil and natural gas industry across the country. Once implemented, the EPA estimates they could remove 41 million tons of methane from our atmosphere by 2035 — roughly equivalent to cutting out all the carbon dioxide emissions from all American passenger cars and commercial aircraft from the entire year of 2019.4

These rules won’t be the silver bullet to halt climate change — but they are an important step on the right path. Now we need to make sure they get implemented in as strong a form as they possibly can.

The time to fight climate change is now — and these rules will help keep a deadly planet-warming gas out of our air.

We need these rules now. Let’s tell the EPA to get to work cutting greenhouse gas emissions.