Tell Interior Secretary Haaland: Our wolves are running out of time

Tell Interior Secretary Haaland: Our wolves are running out of time

Last spring, an estimated 1,500 wolves lived in Idaho. By the year’s end, a full third of those wolves had been killed.1 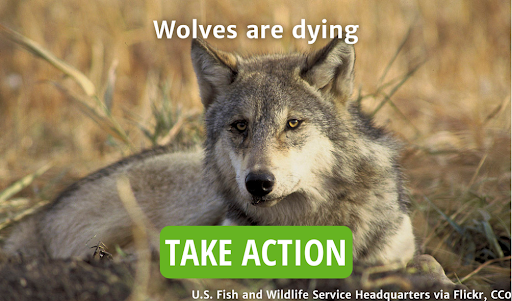 This is an emergency for wolves.

Extreme wolf hunting legislation in Idaho, along with neighboring Montana and Wyoming, will allow wolf killing to continue with virtually no limits.

If this isn’t an emergency for our wolves, then what is? We need to protect these iconic animals before they’re wiped out.

We need to urge Interior Secretary Deb Haaland to declare an emergency for our wolves and restore their protections under the Endangered Species Act everywhere in the Lower 48 states.

The gray wolf’s return to the continental United States is considered one of the great conservation success stories of the 20th century. But that story isn’t over — and it still could end in tragedy.

Just a few hundred years ago, wolves roamed nearly every corner of this continent. Their natural habitat ranged from the woods of Pennsylvania to the deserts of Arizona to the mountains of California.

But centuries of concerted efforts to eradicate wolves took their toll. By 1970, wolves only existed in two small pockets in the Lower 48 states: one park in Michigan and one small part of Minnesota.2

After gaining protections from the Endangered Species Act, the newly protected wolves slowly began to spread from their last surviving holdouts. As a result of both natural population spread and deliberate relocation, wolves returned to their former ranges in places like Yellowstone National Park and in states around the northern Rocky Mountains, such as Idaho and Wyoming.

By 2011, the wolves’ populations had begun to recover, and they were removed from the federal endangered species list in several Northern Rockies states. Suddenly, hunters in states like Idaho were killing wolves by the hundreds.3

In 2020, the gloves came off entirely when the Trump administration removed gray wolves from the endangered species list for the entire country.

And the wolves’ delisting resulted in more than just legislation — it’s led to deadly action that’s actively killing our wolves. Last winter, Wisconsin killed nearly 1 in 5 of its wolves in just 60 hours.5

And even though Yellowstone’s wolves are protected in the park, a recent change in Montana law repealed their protections in the areas immediately bordering the park, leading to the record-setting death of nearly 1 in 5 of the park’s wolves after they strayed across the invisible, manmade park boundary.6

This is unsustainable. If allowed to continue, the indiscriminate mass killing of wolves that we’re seeing here will erase a half century’s worth of progress.

It’s time to ask Secretary Haaland: If this isn’t an emergency, what is?