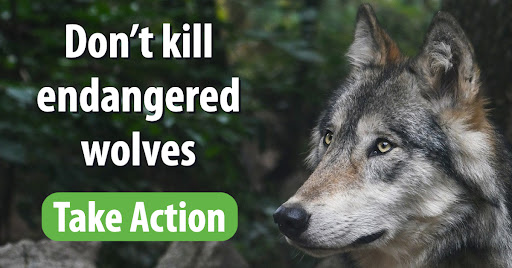 Washington’s wolves are in danger.

From a helicopter, they aimed their guns at a gray wolf pup and fired.

This deadly incident is another example of the Washington Department of Fish and Wildlife prioritizing cattle over the endangered species they’re sworn to safeguard.

Governor Jay Inslee should direct his agencies to do their job of protecting endangered gray wolves.

Shooting an innocent wolf is inexcusable.

Wolves are listed as endangered in Washington state, making it illegal to kill, harm or harass them — unless you’re the Washington Department of Fish and Wildlife.2

Wolves are already struggling to recover. The last thing wolves need is for the agencies tasked with protecting them to shoot them dead.

Even worse, the wolf they shot wasn’t even the one they were trying to kill — it was from a completely different pack.

Shooting an innocent wolf is inexcusable. And really, they shouldn’t be able to kill wolves at all.

Take action to stop the killing of endangered gray wolves.

The Washington Department of Fish and Wildlife kills wolves they believe attacked livestock. But a hungry gray wolf doesn’t know that livestock are off limits for their dinner.

There are other ways to intervene and prevent wolves from eating livestock, including fences, guard dogs and avoiding grazing in areas near wolf habitat.3 Shooting endangered wolves is not the solution.

Washington’s Governor Inslee oversees the agency that’s killing wolves. If we can convince the governor to protect endangered wolves, he can direct them to stop shooting wolves.

Take action to stop the killing of endangered gray wolves.