It’s a priceless place, in a world where wilderness is disappearing beneath the chainsaws, roads and drilling rigs of industry. 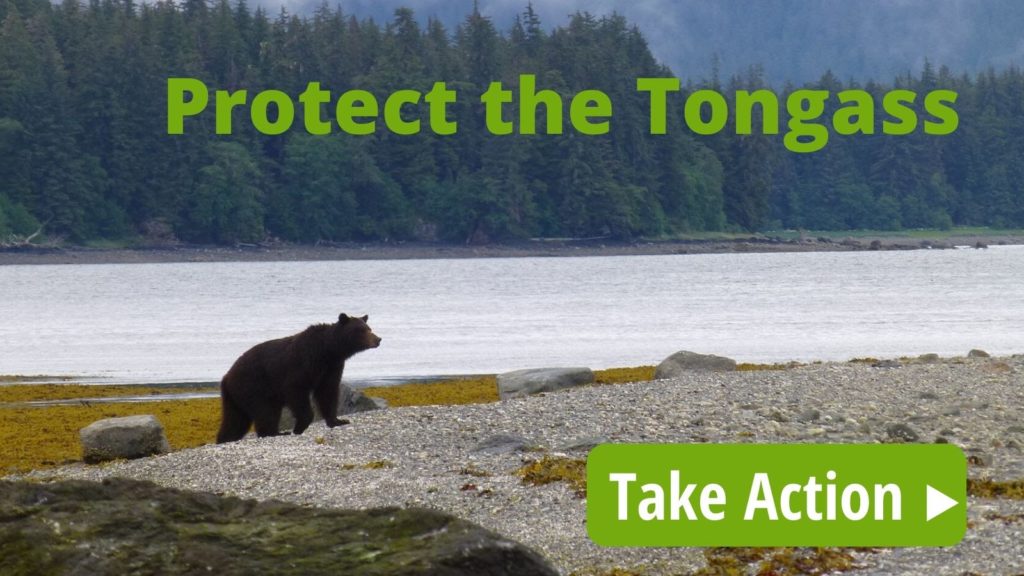 The Tongass is a forest treasure.

Alaska’s Tongass National Forest, the world’s largest intact temperate rainforest, is a sea of centuries-old trees that shelter bears, eagles and salmon in huge numbers, along with a unique species of wolf and too many other creatures to list.1

The Trump administration wants to open it up for mining and clear-cut logging — even in the face of massive public opposition. It’s clear that Congress needs to step in. We need to tell our representatives to protect the Tongass, and other forests, by passing the Roadless Area Conservation Act.

Wolves, salmon, bears and more depend on this ecosystem to survive.

Waiting by the forest’s shady streams to catch salmon, and sometimes clambering to the top of its trees, are black and brown bears: The Tongass’ islands are home to the largest black bear population in the world, and the largest concentration of coastal brown bears. Deer roam the trees; eagles bank overhead and nest in the pines’ high boughs.2, 3, 4

The Tongass’ rich wildlife is largely kept intact by the Roadless Rule, which protects national forests from extractive industry in 39 states. But the Trump administration is seeking an exemption for the Tongass to allow mining, development and clear-cut logging in the national forest.5

The Roadless Rule can protect the Tongass.

Carving roads through this wilderness, and logging its ancient trees for pulp and timber, would eviscerate these creatures’ habitat.

That’s why public comments submitted last fall overwhelmingly opposed — to the tune of 24 to 1 — the Trump administration’s plan to exempt vast swathes of the Tongass from Roadless Rule protections, opening them up to extractive industry. It’s clear: Americans don’t want to see the Tongass destroyed for logging, mining and development.6

And yet, industry and its allies in the administration aren’t slowing down. That’s why we need Congress to pass the Roadless Area Conservation Act — which would make the Roadless Rule permanent, protecting not just the Tongass, but across 58.5 million acres of national forest.

Tell your representative: Support this legislation to protect the Tongass and keep wild places wild.