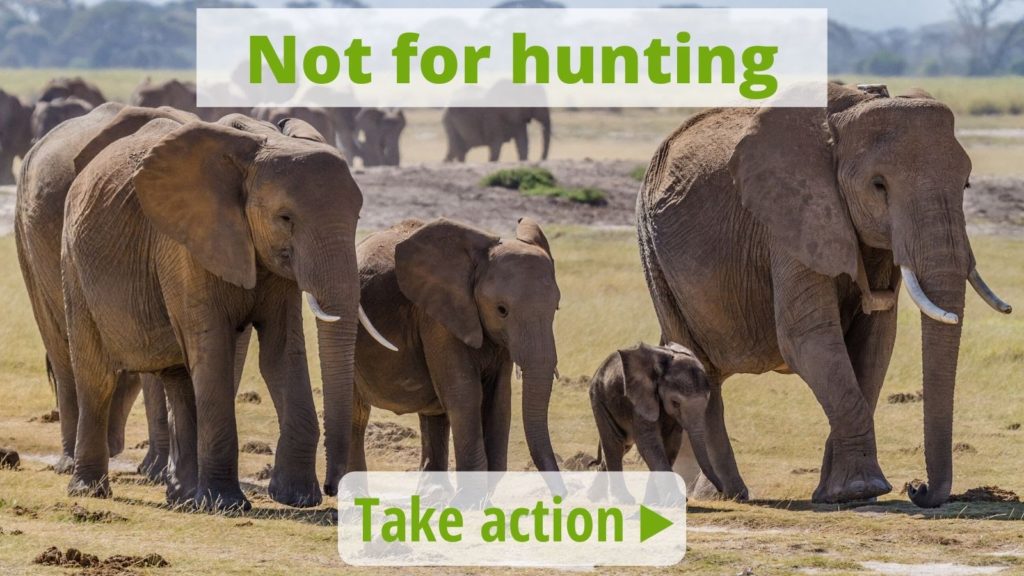 From 2007 to 2014, their population plummeted by 30 percent. And that drop is only the latest chapter in a 100-year-long history of poaching that has brought elephant numbers down from 10 million to less than 500,000.1,2

They need protection more than ever. So why are we allowing Americans to hunt them for sport?

That’s a question that Congress is asking itself right now. A bill they’re considering, the CECIL Act, would reinstate a ban on importing hunting trophies from elephants and lions. Tell your representative: Support the CECIL Act.

Elephants are so much more than the planet’s biggest land animal.

Extensive research shows them to be remarkably intelligent, social and empathetic beings, capable of complex problem-solving, lifelong learning, tight family bonds and profound grief at the death of a loved one.3

They deserve to survive. But hunting and poaching continues to drive elephants’ numbers down. And conservationists’ studies and anecdotes tell of serious emotional and psychological disruption that sport hunting can exact on elephant groups.4,5

Take action to put a stop to trophy hunting.

In 2018, the Trump administration suspended an Obama-era ban on importing elephant trophies. That raises huge concerns: 80 percent of trophy hunters worldwide are Americans, so U.S. importation of elephant trophies is a huge part of the problem.6

Allowing people to kill animals this special — with family bonds this strong, at a time when their population is more vulnerable than ever — is unconscionable. Trophy hunting needs to come to an end

The CECIL Act would ban these imports once and for all. Let’s secure a future for elephants: Send a message to your representative today urging them to support the CECIL Act.