The monarch butterfly is an iconic species that migrates through the heart of the United States each year. Unfortunately, the number of monarchs has decreased by 90 percent since their peak in the mid-90s.1 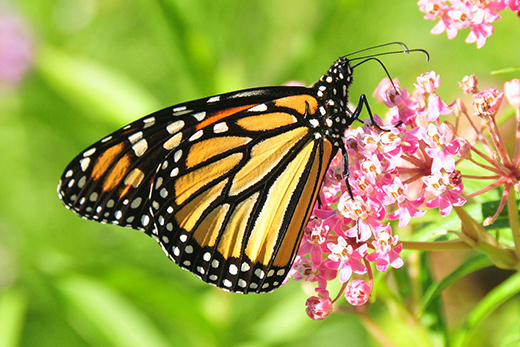 Monarch butterflies have declined by 90 percent since the 1990s. Photo: USFWS

The monarch butterfly’s decline in America isn’t a natural phenomenon. In fact, The Washington Post called it “nothing short of a massacre.”2

Pollution-driven climate change is part of the problem. But we’re also allowing the destruction of milkweed — the monarchs’ main habitat and food source — through the rapid acceleration in use of Monsanto’s toxic Roundup and Roundup Ready crops.

Monarchs cannot survive without milkweed; it’s the only food source for their caterpillars, and monarch butterflies need milkweed to lay their eggs.3 Roundup kills milkweed, and in recent years, the amount of Roundup we’re using in the United States has skyrocketed.4 No milkweed, no monarchs.

We’re endangering the existence of one of our most beautiful creatures and for what? So Monsanto can sell and farmers apply more herbicides? Even as a growing body of evidence indicates Roundup is endangering human health and becoming less effective? No part of that makes sense.

But since Monsanto makes millions selling Roundup, they won’t stop selling the herbicide on their own. In fact, Monsanto and other big agrichemical companies have been pushing the Environmental Protection Agency to allow even more widespread use of their herbicides.

We need to raise awareness across the country and build the public support needed to stand up for monarch butterflies before it’s too late. By taking action today, you’re giving a voice to monarchs and other creatures threatened by widespread pesticide use.

We can protect monarch butterflies by convincing the Environmental Protection Agency to ban Roundup. Your action today will help give the monarchs more than a fighting chance. But we have to act now.

Send a clear message to the Environmental Protection Agency today to show you want strong protections for the iconic monarch butterfly. Add your name to our monarch butterfly petition right now and help ensure these incredible, ecologically vital creatures are around to and delight nature lovers for years to come.