Wild red wolves are living on a knife’s edge between survival and extinction. As few as 15 of these incredible animals now roam their ancestral habitat in the forests of North Carolina.1 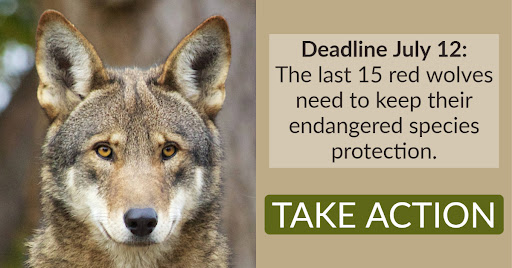 We have a chance to speak up for red wolves right now.

With so few remaining, the wolves are in serious danger of being picked off one by one until none remain. A red wolf was shot by a poacher in April and left mortally wounded to drown in a puddle of mud.2

But there is hope: This spring also brought us the first litter of wild red wolf pups born since 2018.3 These pups deserve to grow up safe from hunters — and we have the chance to speak up to protect them right now.

The U.S. Fish and Wildlife Service (FWS) is accepting comments from the public as it reassesses the red wolf’s endangered status. If you want to speak out to protect the wolves, add your name before the July 12 deadline.

Only about a dozen wild red wolves are left.

Every five years, species listed under the Endangered Species Act (ESA), like the red wolf, undergo a review of their protections under the law. The FWS collects any new data about the species and decides whether it should keep the same level of protection, get increased protection — or lose its protection entirely.4

Losing any amount of protection would be a disaster for the red wolf. We’ve seen it happen before. By 2012, strong protection had helped the wild red wolf population soar from zero to around 120.5 But then, in the decade following, the FWS abandoned the conservation initiatives that were working so well.

The FWS stopped releasing wolves and even granted some permits allowing landowners to kill wolves on private property.6 The wild red wolf population was decimated: Today, little more than a dozen cling to survival in the North Carolina wilderness.

More recently, the agency has returned to some tried-and-true conservation tactics for red wolves, even releasing eight wolves to the wild last year.7 Between the release of captive wolves and the birth of new puppies for the first time in years, the population has a chance to turn the corner toward recovery.

But these wolves will only survive if they keep the strong protection of the Endangered Species Act — and that’s where you come in, [[First_Name]].

Our voices have helped save the red wolf before. Thousands of Environmental Action supporters joined our 2018 campaign to oppose a plan that would have shrunk the red wolves’ protected habitat — and the disastrous plan was nixed within the year.8

Now, we have the power to speak up for red wolf conservation again.

Take action to convince the FWS to maintain the red wolf’s endangered status and provide them with the strongest possible protection.