Any animal that triggers a “cyanide bomb” can asphyxiate and die in just minutes.1,2 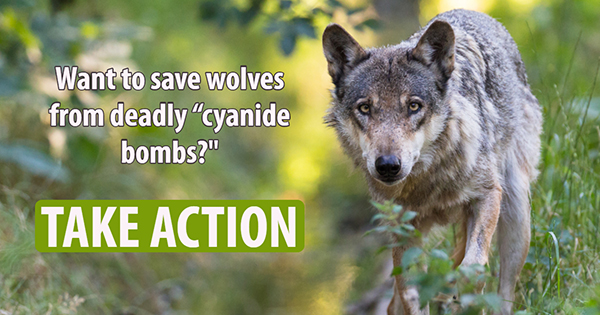 Imagine a wolf exploring, using its sensitive nose to search for clues about its environment. It might come across a small, unfamiliar object that smells just like food. Wolves are curious and intelligent, so it might bite or pull on the device to learn more — but when it does, it will get a toxic spray of sodium cyanide to the face.

These deadly “cyanide bombs” are used to kill wildlife, and they don’t discriminate. Wolves, foxes and even domestic dogs have been killed by them — and humans have been poisoned, too.3

We need to ban these predator control devices nationwide before any more wolves meet this awful fate.

These devices are just too dangerous.

These devices leave carnage in their wake. In 2017, a boy was poisoned by a cyanide bomb, and his dog was killed in front of him.4 Later that year, a wolf from Oregon’s Shamrock Pack was found dead — the unintentional victim of a cyanide bomb set by the U.S. Department of Agriculture.5

As long as cyanide bombs are still in use, it’s impossible to guarantee that they won’t keep harming or killing anything that touches them — even endangered animals.

By their very design, these traps are set and left unattended where anything — or anyone — could unknowingly trigger one. These frightening devices can even be placed as close as half a mile from occupied homes.6

How you can help:

Right now, the future of all gray wolves in the Lower 48 states is hanging in a precarious balance. The Interior Department is in the process of deciding whether or not gray wolves will keep the proven protection of the Endangered Species Act, or be delisted once and for all.

We’re working hard every day, doing all we can to make sure wolves keep the protection they need. But no matter what happens — whether wolves keep their federal protection or not — we can take steps to make our country safer for these magnificent animals.

Outlawing deadly, indiscriminate cyanide bombs is a great place to start. The wild spaces we share with wolves and other wildlife are no place for devices full of poison that can harm and kill people and animals alike.