With their sleek black and white bodies, and graceful ocean acrobatics off the coast of Washington and Canada, Southern Resident orcas are some of our planet’s most amazing creatures. 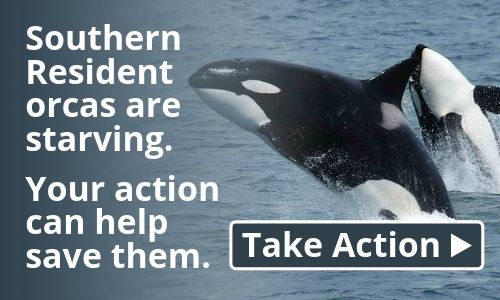 The Southern Resident orcas are starving.

The Southern Resident orcas are starving to the point of extinction — there are just 76 left in the wild. Why? Because U.S. Army Corps of Engineers dams in Washington state are keeping the salmon they need to eat to survive from reaching them.1

Congress needs to approve removing these dams — but the Senate isn’t going to breach the dams in Washington unless Washington’s senators ask them to.

That’s why we need to let Washington’s senators know that the whole nation wants them to take action to save the orcas.

Over the course of just a few generations, the orcas’ food supply has plummeted.2

Chinook salmon make up 80 percent of the Southern Resident orcas diet. But since the construction of the Lower Snake River dams, Chinook salmon populations have dropped alarmingly.3.4

These orcas aren’t just starving; they’re starving to the point of extinction. By removing the dams and restoring the Lower Snake River, we can restore the Chinook salmon.5

Part of the dolphin family, orcas live in tight-knit family groups — called pods — which can range from two to 30 members.6 Orca families are an irreplaceable part of our planet’s ecosystem, and to save them, we need to save their food.

Saving the Southern Resident orcas will take a national effort. That’s why we need your voice.

Speak up to save orcas.

Our friends at Environment Washington have been working hard to protect the Southern Resident orcas — and the state has made progress.

Washington state’s Gov. Jay Inslee has put together an Orca Recovery Task Force, and the state Legislature has budgeted funds to assess the potential impact of removing the dams. Idaho representatives have also come out in support of restoring the salmon populations and removing the dams in their state.

But we need Congressional approval to remove the dams that are separating these orcas from the salmon they need to survive — and to get that, we need your voice. Add your name today.

Save the Southern Residents